Do you know Maryse Hilsz? A great lady of aerophilately (1st part)

Maryse Hilsz's life has been entirely dedicated to aviation. The intrepid young woman set several records and travelled all the way to the Far East. This is why aerophilately fans are still fascinated today!

A lifelong passion for aviation

Marie-Antoinette Hilsz was born in Levallois-Perret on March 7, 1901. After leaving the communal school in 1916, she became the apprentice of a milliner, but was not really into ribbons and hats. Her mind kept wandering, dreaming about the pioneers of aviation and the heroes of war: Guynemer, Nungesser, Fonk…

As soon as the war was over, she prowled around the airfields and attended meetings. She really wanted to get her pilot’s license but it was very expensive. Her father, a dry-cleaner, died accidentally a few years earlier and her mother, a laundress with three children, was unable to fulfil her dearest wish. Parachute jumps were the main attraction of the meetings and the few parachutists were well paid. “A perfect opportunity to combine business with pleasure,” Marie-Antoinette must have thought.

At 21, she changed her first name to Maryse, joined a bunch of daredevils and participated in 61 meetings. She completes 112 jumps without accident! There were only two minor incidents: one day, she got stuck on a roof for a quarter of an hour and another time, suspended by her gear in a tree. She had to wait for two hours for someone to come and unhook her. In 1928, Maryse finally had enough money to learn to fly. She passed her license in 1929 and immediately bought a small second-hand aircraft made in England, and flew extensively between Paris and the main European capitals. This was the starting point of her real career.

From May to June 1930, she travels through North Africa and prepares Paris – Saigon – Paris. She declares: “For my first Paris – Saigon and back, representing 24 000 km, I calculated that I had to travel 7000 km within Paris and its suburbs in order to prepare everything: Ministry of the Air, technical services, consulates, meteorologists – and not to mention the manufacturers of the various brands of gasoline and oil!”.
On November 12th, 1930, Maryse takes off towards Indochina, alone on board her new Morane-Saulnier Moth 60 M F – AJOE equipped with a 100 HP engine and named “Paris – Saigon”. She lands in Saigon on December 5th, with only a few days delay on her forecasts, due to bad weather and a leak in the gas tank, which caused her to lose 7 days in Rangoon. The return trip is even more eventful. She leaves Saigon on December 12th, but on December 18th, she was forced to land 50 km from Bouchir due to a ruptured oil pipeline. On December 28th, her plane flipped over while landing on the drenched Constantinople ground. Maryse returns to France by boat Athens – Marseille.

We do not know of any letters transported from Paris on this first Paris-Saigon flight. Maryse Hilsz had not yet 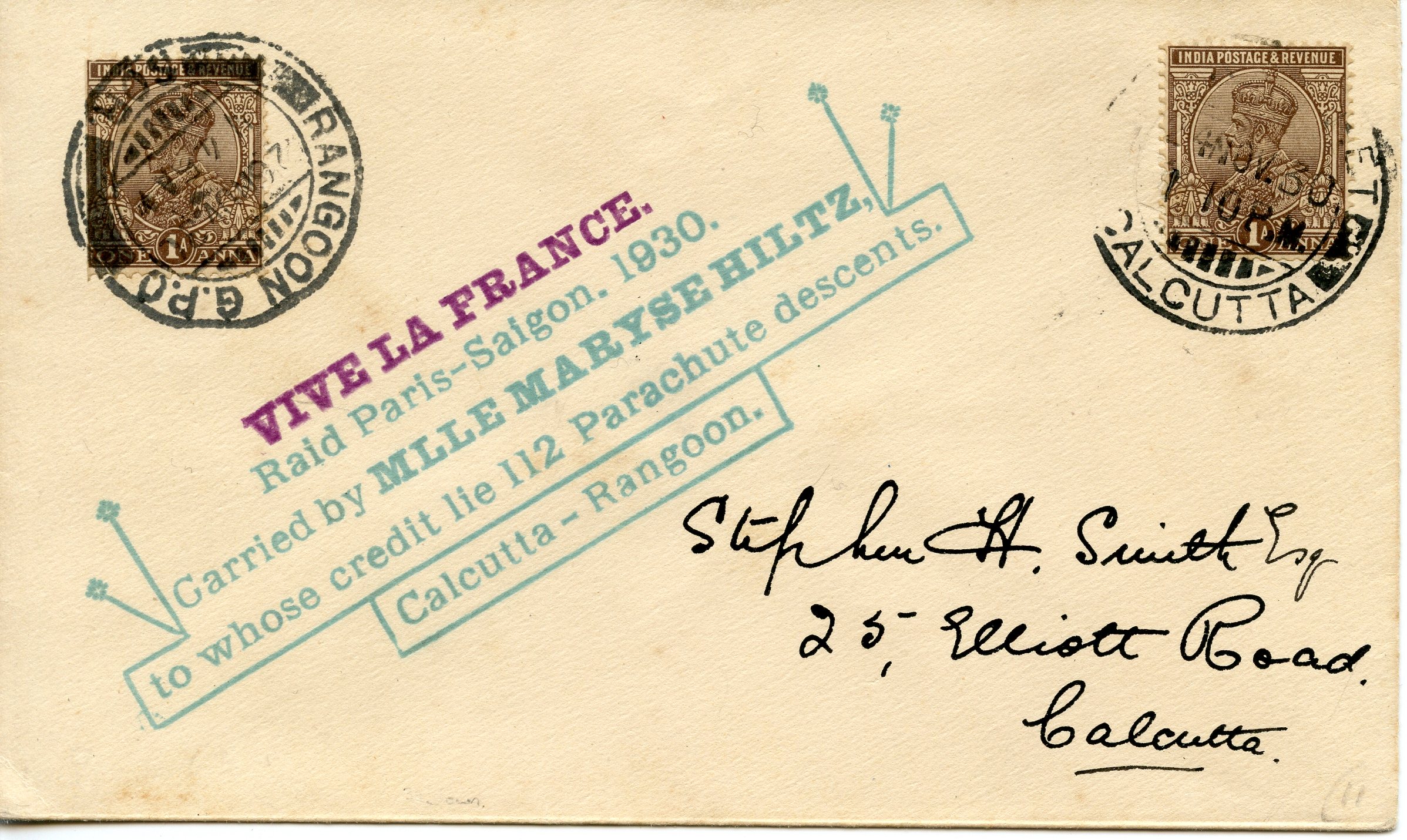 proven herself on long journeys and no private individual, aerophilatelist or trader would have had the idea to entrust her with anything of the kind.
This was not the case in India, where a Calcutta trader, Stephen Smith, created a two-tone stamp, to the glory of France and Maryse Hilsz, which he used on 39 envelopes bound for Rangoon. These letters have a double postage of 1 anna and the departure postmarks CALCUTTA 24 NOV 30 and arrival postmarks RANGOON 25 NOV 30. These letters were returned to him by the normal route and bear the arrival stamp.

Upon her arrival in Saigon, Maryse promptly sent some postcards to her aviator friends. No big statements, as this wasn’t her style. Simply: “Saigon, December 5, 1930, signed Maryse Hilsz”. It simply meant: “See, I did it! “.

written by Gérard Collot of the CAF