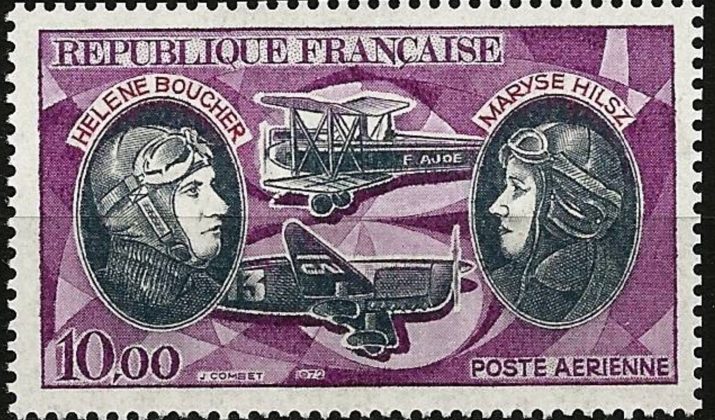 Before reading this one, discover the first article dedicated to Maryse Hilsz.

Having developed a taste for long journeys, Maryse Hilsz prepares Paris-Madagascar and back. This time, she flies a Farman 291, registered F – ALUI and named “JOE II”. Accompanied by the mechanic Dronne, she took off from Le Bourget on 31 January 1932 but did not arrive in Tananarive until 31 March.A serious mechanical problem on February 4 in Birni n’Konni, a village lost in central Africa, forced her to change the engine – which caused her to lose more than a month. Her friends Jacques and Violette de Sibour brought her a new engine on board their Farman, identical to Maryse’s.

The return trip took 29 days : from April 8 to May 7, 1932. It was marked by a forced landing in the islet of Juan de Nova. Maryse commented on her adventure: “The horrible engine failure ! It happened right above the merciless waves, in a plane on wheels. But maybe even worse: I only know how to swim for a few strokes…. After leaving Tananarive, I flew 200 kilometres for an hour. Arriving in Tambouharano, upon receipt of a telegram from the Governor General, I decided to cross the Strait of Mozambique; the sky was cloudy, it was cold, the waves followed one another, endless. And suddenly, my engine stopped: it was an engine failure. Fortunately, this happened just a few moments after overflying the Juan de Nova islet. I landed on a silvery beach, surrounded by coral. The natives came to welcome me very kindly, inviting me to share their meal. That’s how, for the first time, I ate turtles. The next day, I was lucky enough to spot a patrol boat of the French Navy: The “Antarès”. After 5 days of work my engine was repaired and I was able to leave again.” 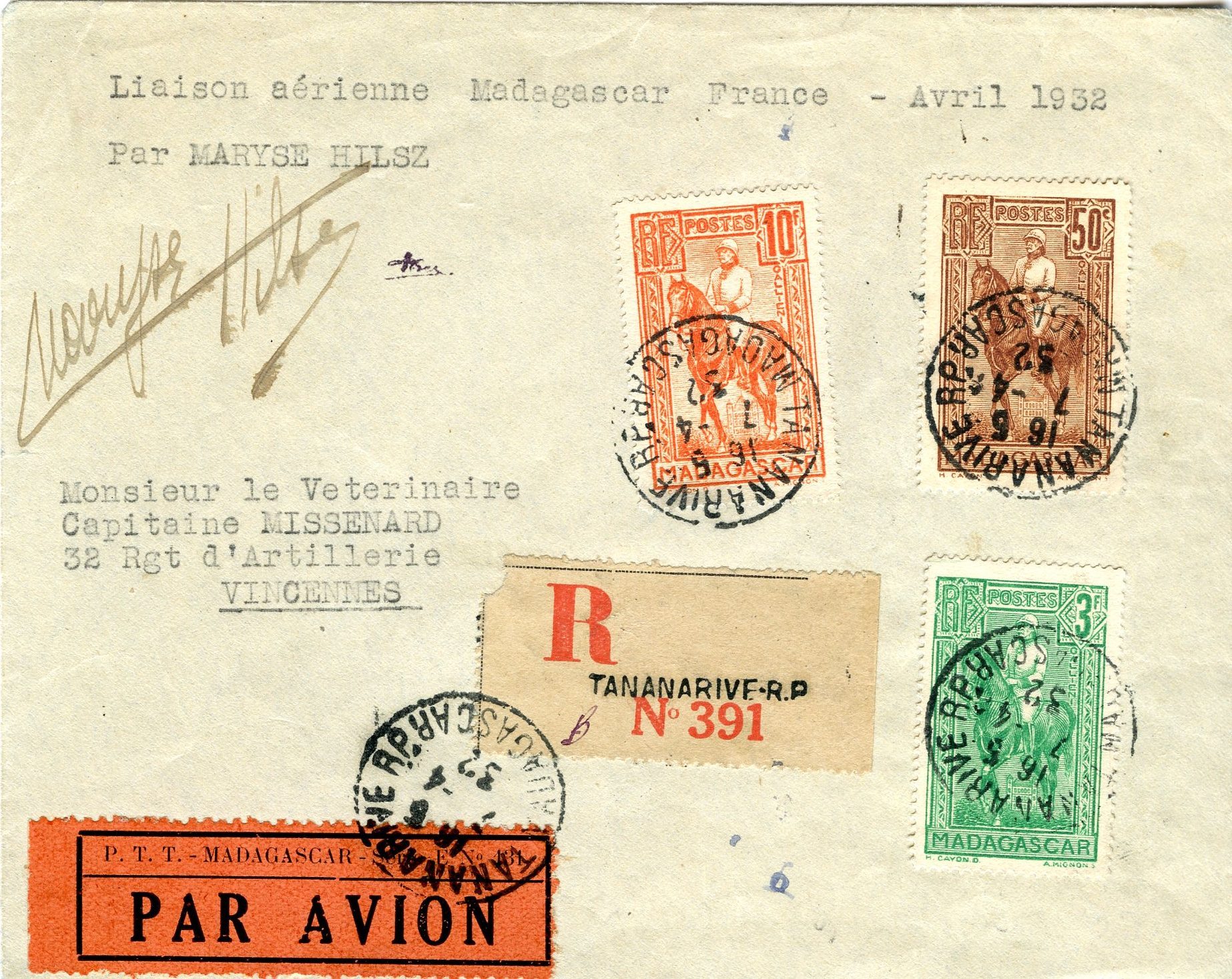 We do not know of any letters for the outward journey but there was a small quantity from Madagascar with cancellations of TANANARIVE 6/4/32, arrival PARIS GARE DU NORD-AVION 8/5/32. The letters bound for North Africa were rerouted by the classic air route and bear the transit stamp of MARSEILLE GARE-AVION 9/5/32, arrival ALGER- R.P. 10/5/32.

After her return from Madagascar, Maryse decided to change sport and tackle the women’s altitude record. The goal was to do better than the American Miss Ruth Nicholls who held the record with 8761 meters (5.44 miles). For 3 months, Maryse trained very seriously and on August 10, aboard a Morane Saulnier equipped with a 420 HP engine, she reached 9791 meters (6.08 miles); a thousand meters more! That’s considerable! She was awarded the Knight’s Cross of the Legion of Honour.
With the record set, Maryse was again attracted by the East and decided to do Paris – Tokyo – Paris with her Farman 291 “JOE II” accompanied by Lemaire, a mechanic replacing Dronne, with whom she had quarrelled following her breakdown in Birni n’Konni. She left Paris on April 1, 1933, landed in Hanoi on the 7th and in Tokyo on the 16th. That was a great achievement! Paris – Hanoi in 5 days 20 hours and 13 minutes, Maryse equalled the best male performances on this course, everyone saluted her audacity, courage and physical strength. It must be said that Maryse combined feminine grace with an uncommon muscular strength which allowed her to fly aircraft normally intended for men. The return is made from April 23 to May 14. She was seriously delayed by the bad weather, once in Seoul where she lost 2 days, a second time on May 13, where a very dense fog forced her to land in Lyon, then in Romilly, while she hoped to fly non-stop from Brindisi to Le Bourget. 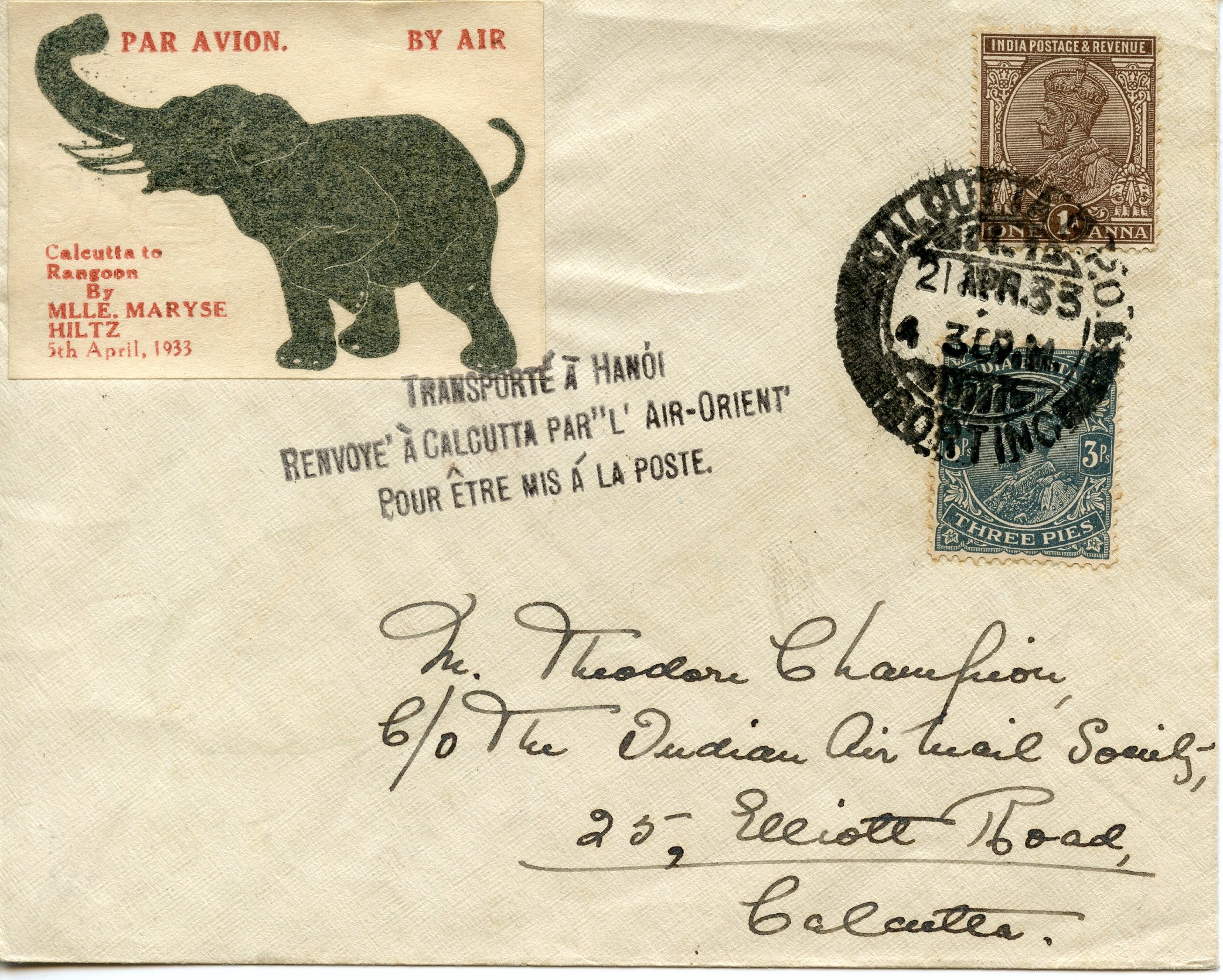 For the outward journey, only the same trader from Calcutta, Stephen Smith, prepared 90 envelopes with a vignette illustrated with an elephant for the Calcutta – Rangoon route. But Maryse, preoccupied with setting a new record, only handed over the package of letters when she arrived in Hanoi. These letters were returned to their recipients by AIR ORIENT, which posted them in Calcutta. The recipient then affixed an explanatory mark of 3 lines. They have a CALCUTTA 21 APR 33 departure and CALCUTTA 22 APR 33 arrival cancellation.

For the return trip, only one letter is known to date. It is a postcard signed Maryse Hilsz addressed to the company CASTROL and containing, as usual, a very short text: “Acknowledgements”. The original cancellation TOKIO 22/4/33, arrived at Castrol 15 MAY 1933. 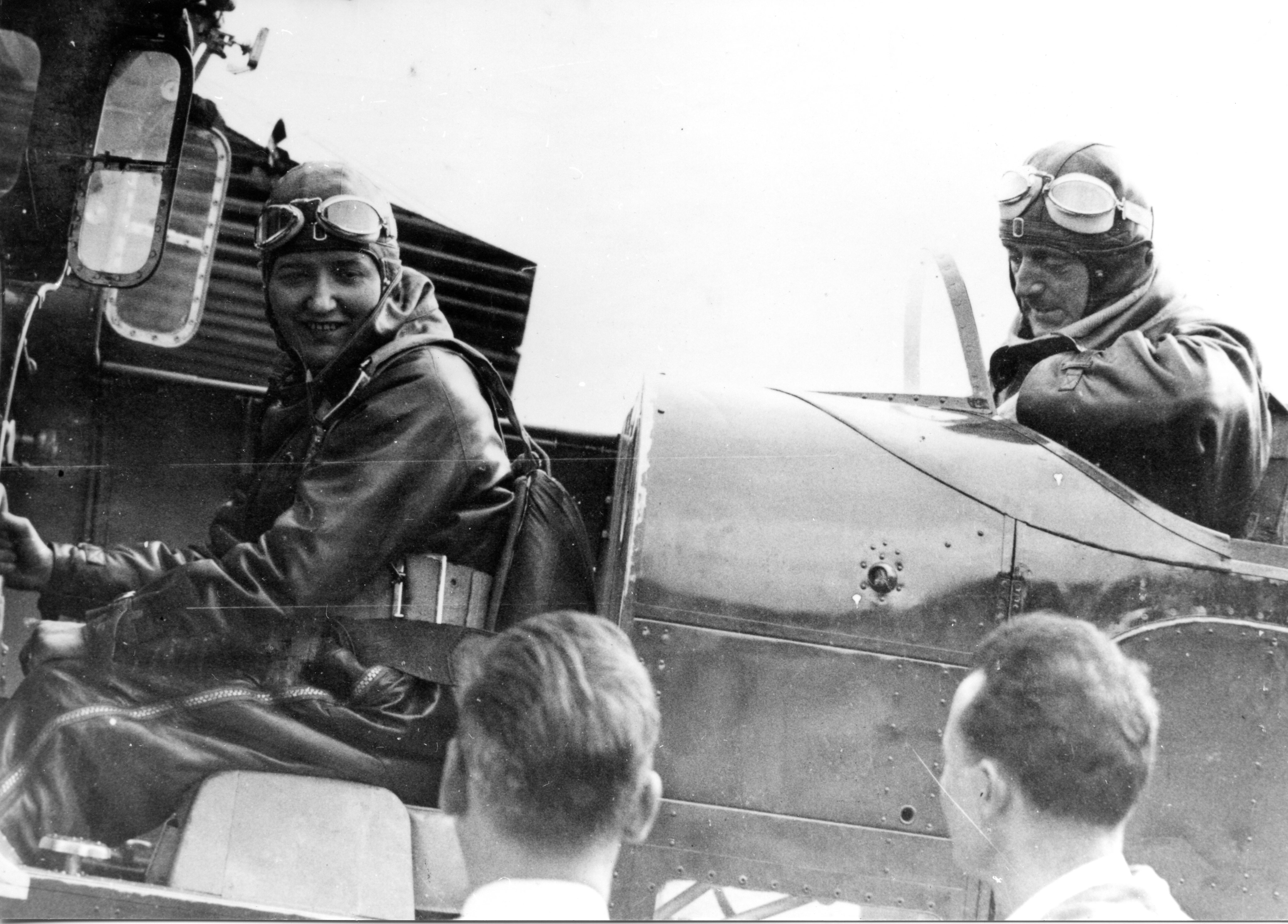 Upon her return, Maryse Hilsz was surprised to be awarded a Breguet 330 by the French Ministry of Air. It was an all-metal military device that had to be presented abroad. Maryse immediately planned another trip to the Far East and named her plane “JOE III”. After a few months of getting to grips with it, accompanied by mechanic Prax, Maryse left France on January 26, 1934 for a new trip to Tokyo. On January 31, at the Aleppo stopover, a violent storm broke out. The aircraft broke its moorings and was seriously damaged. She will not arrive in Tokyo until March 6, 39 days after her departure from Paris. In recognition of her rare merits, Maryse Hilsz was awarded the Great Gold Medal of the Imperial Japanese Aviation Society. On her return, she left Japan on March 20, went through China, stopped for a few days in Indochina and brocked a new Saigon – Paris record in 5 days and 10 hours.

We don’t know of any letters transported during the outward journey.
On her return trip, Maryse Hilsz made stops in Korea and China to reach France via Indochina. In Keijo (Seoul-Korea, occupied by the Japanese from 1910 to 1945), she was given a small amount of letters (some sources say 10 letters, but we only know 2 to date), bound for Indochina.

These letters bear the departure cancellation of Keijo 17/03/34 on Japanese stamps, as well as the transit cancellation in Tientsin (Northern China, now Tianjin) with a cancellation at the French Consulate.

On June 11, 1935, for a change, Maryse challenged her own altitude record and reached 11265 meters with a Morane-Saulnier 275.
To be continued… Discover the objects related to aerophilately for sale on Delcampe.

Written by Gérard Collot from the French Aerophilately Circle (CAF)