Many collectors are passionate about the first Mauritian stamps. They are among the most sought-after stamps and letters in the world. This article covers the letters Mauritius collectors dream of the most. 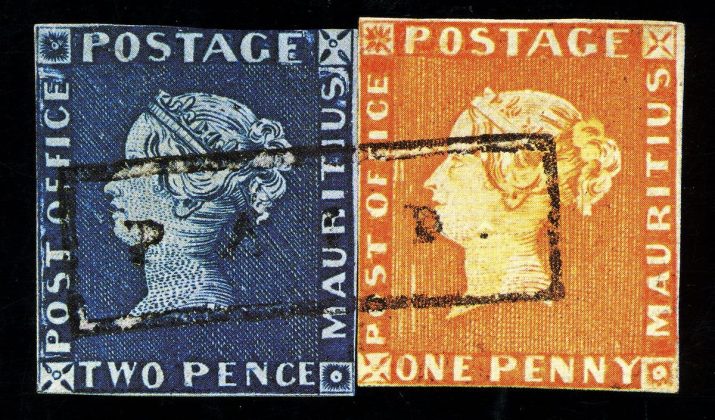 The stamps have a face value of one penny and two pence. They were printed in 1847 using an engraved plate by Joseph Banard. They bear the image of Queen Victoria in profile, in keeping with the Penny Black stamp. 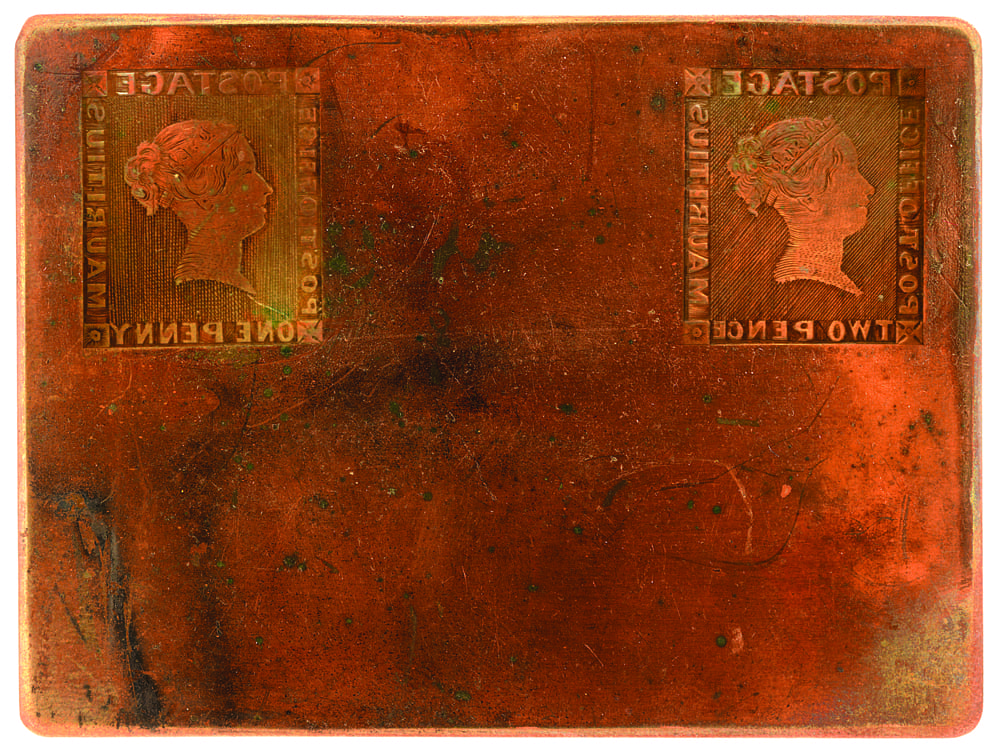 Printing was done stamp by stamp with the plate and quickly ended. No reprints were made. Due to this, the initial print run was very small. The mythical plate was sold in 2016 by the David Feldman auction house for €1,230,000 and is now in the hands of a passionate anonymous collector.

As early as 1897, the stamps became part of philatelists’ dreams. At the time, there were only 17 stamps and they were already reaching unbelievable prices. They were all found in France or in Mauritius.

Letters which have gone down in the history of philately.

In addition to the individual stamps, which are extremely rare and reach very high values, there are also letters which circulated with the stamps. 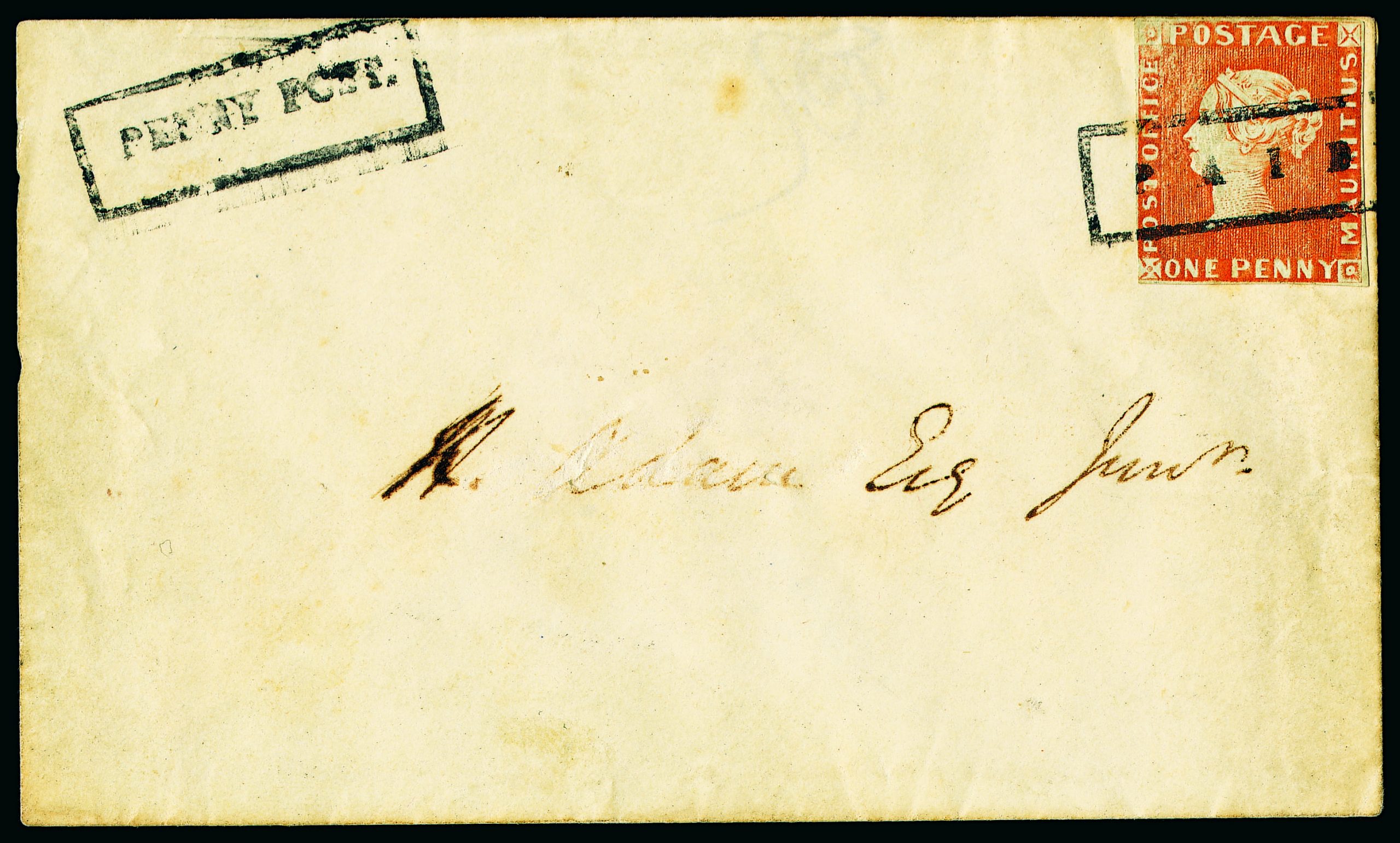 Three invitation letters to a ball

The printing of the stamps coincided with a ball thrown in Mauritius. The invitations to the party carried stamps. Of course, most of the envelopes were lost or destroyed. However, three have been found, each of which carries a single one-penny stamp. One of these letters was sold in 2007 for one million euros! 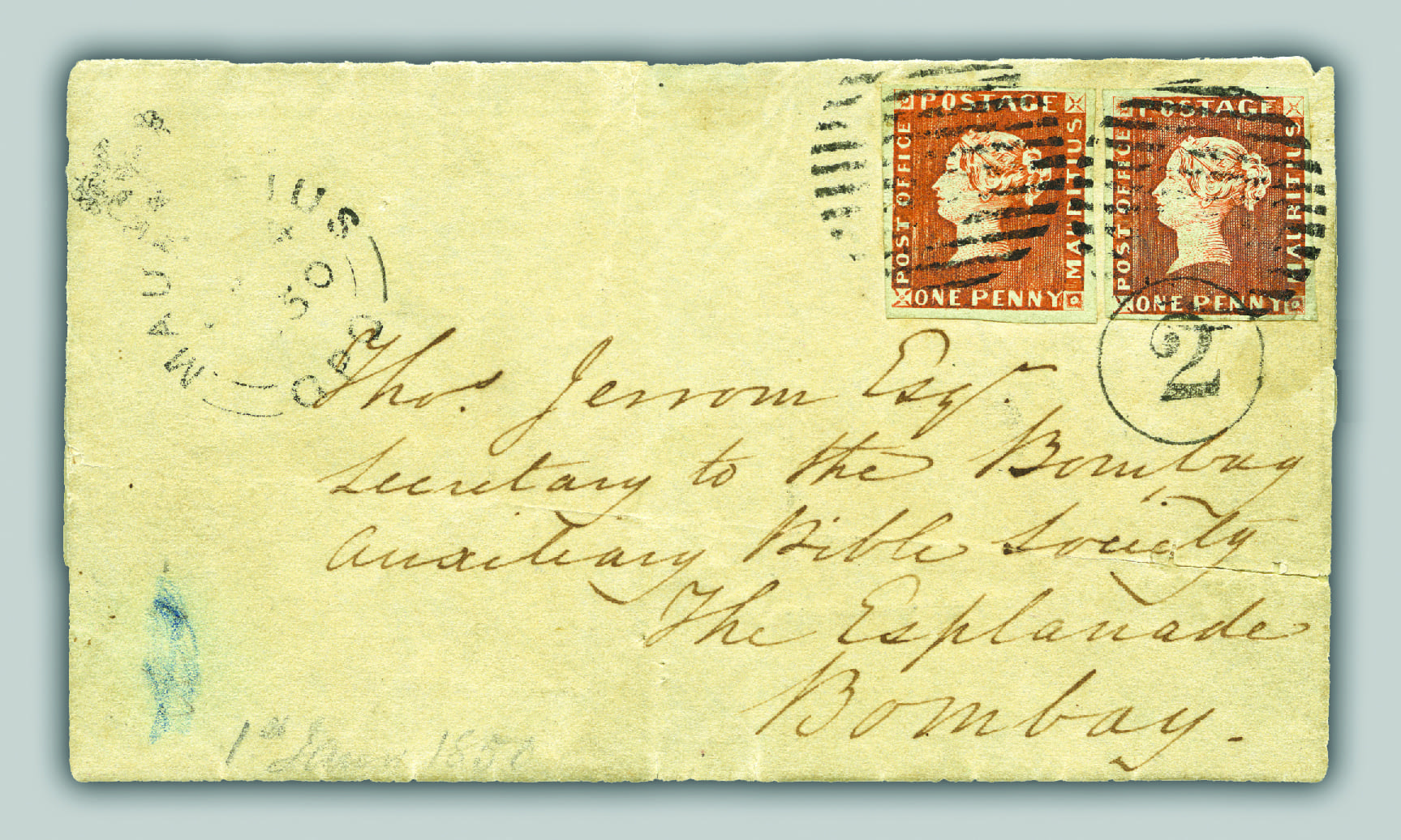 This letter carries two perfect one-penny stamps. That is, they are the right colour, well-centred, etc. It’s called the Bombay letter because it was discovered at the end of the 19th century in a bazaar by rail employee Charles Howard. The letter was sent by Reverend Langrish Banks, who was working in Mauritius on behalf of the British Foreign Bible Society. The recipient was Thomas Jerrom Esquire, secretary for the Society in Bombay. The letter and the stamps were cancelled on January 4th 1850, i.e. three years after the stamps were printed. The most likely explanation for the late cancellation is that they were undoubtedly forgotten and then later found by Banks.

It should be noted that the postmaster at the time, a certain James Stuart Brownrigg, most likely knew him. In fact, James’ brother, Charles Brownrigg, married Rosa Matilda Fyers, whose sister, Louisa, was the reverend’s wife. What is more, the two sisters had their weddings at the same time. As a consequence, it’s likely that Langrish Banks received the stamps from James Stuart Brownrigg. Since he wasn’t sentimental nor a philatelist, he used them several years later.

Charles Howard bought the letter for five rupees at a Bombay bazaar. One year later, he sold it to W.H. Peckitt for £1,600. The philatelist resold it the same year to Vernon Roberts for £1,800 before repurchasing it for £2,000 in 1905. He then sold it the next year for £2,200 to Mr Worthington, who sold it to Alfred Lichtenstein in 1917. The stamp remained in the family until the philatelist’s death and was sold by his heirs in 1968 as part of a collection lot. At the time, however, only the letter was assessed, in the amount of $380,000! Its owner, the Raymond H. Weill Co., kept it until 1990, when the letter was purchased by Dr Chan Chin Cheung. In 1996, it was sold to Guido Craveri (Private Sale) and became part of an anonymous philatelist’s collection in 2007. It changed hands one last time in 2016, thanks to the work of David Kopriva and the David Feldman auction house, and became the property of an anonymous Czech collector who acquired it for €2,400,000. 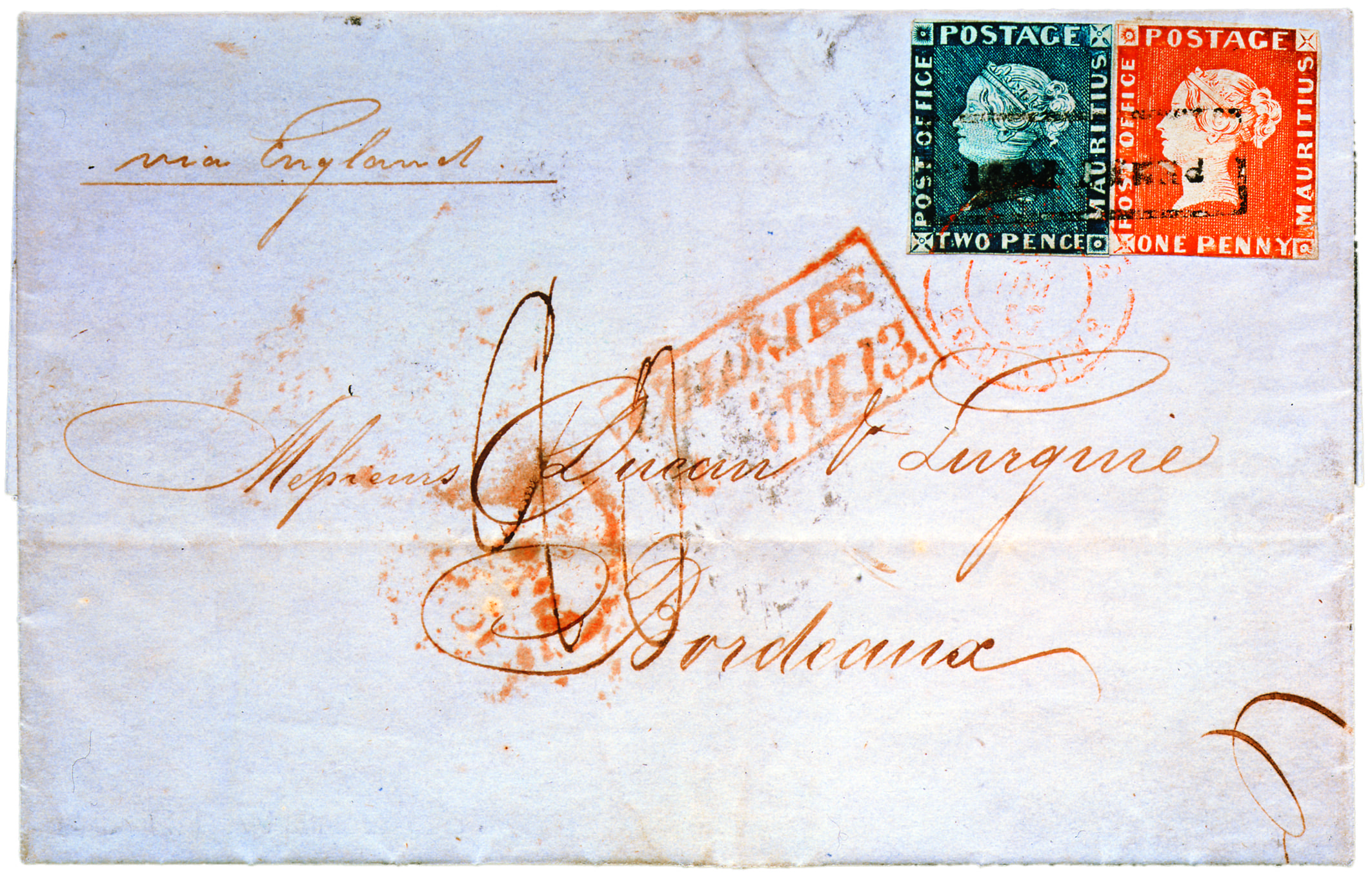 This letter is as – if not more – remarkable than the Bombay letter. It carries Mauritius stamps numbers 23 and 24, i.e. a copy of each of the two stamps. The letter was sent to French wine merchants Ducau et Lurguie. It was mailed to Bordeaux on 4 October 1847. Sent by boat, it reached its destination on 28 December 1847. In 1902, the letter was found by a student among the merchants’ correspondence.

It was sold to Th. Lemaire in 1903 for £1,600 then resold the same year to Brunet de l’Argentière for £1,800. Alfred Lichtenstein, who owned both letters during his lifetime, acquired it next in 1917 as part of Brunet de l‘Argentière’s collection. He sold it five years later to famous philatelist Arthur Hind. It was then sold in 1934 to Maurice Burrus, who passed it on to his son. It remained in the family until 1963, when it was purchased by the Raymond H. Weill Co. Having a preference for the Bombay letter, they came to a strange agreement with the philatelist Kanai: if he did not bid on the Bombay letter and they were able to obtain it via an auction, they would sell him the Bordeaux letter at the price for which they acquired the Bombay letter. This was the case. Hiroyuki Kanai thus purchased the Bordeaux letter in 1968 for 120 million yen.

It was then sold in 1993 through the David Feldman auction house to a German collector for the record price of CHF 6,123,750. The collector still owns it to this day.

Another letter was addressed to the Ducau et Lurguie wine merchants in Bordeaux. It carries a single two-cent stamp of which a piece is torn from the left side near the “O” in “OFFICE”. It is cancelled at the bottom left. The letter has the following markings on the reverse: COLONIES & C. ART. 13 in a rectangle. Like the other letter, it was found by a French student while searching through the wine merchant’s correspondence. It was purchased in 1903 by Th. Lemaire for £1,200 and resold the same year to P. Kosack for £1,400.

In 1904, the postal museum in Berlin acquired the letter for the equivalent of 35,000 Swiss francs. It was placed in a glass wall frame with seven other stamps.

In 1943, the frame was stored in the Reichsbank of Berlin to protect it from bombings. Then, to avoid any risk, the frame was hidden in a potassium mine near Eisleben. It soon became the property of Dennis Sweeney, an American captain who attempted to sell it through Robson Lowe. The latter contacted Interpol. The frame was claimed by Germany. In 1977, Sweeney ended up giving it to an American customs agent. In 1990, the frame was returned to unified Germany and exhibited in the Bonn Museum.

We could write more about the Mauritius stamps and letters because they are rich in history and definitely rank among philately’s masterpieces. Many stamps followed the famous Post Office stamps and are for sale on Delcampe.

We would like to thank the David Feldman auction house, Mr Patrick Maselis and Mr David Kopriva for their valuable assistance while researching information for this article.