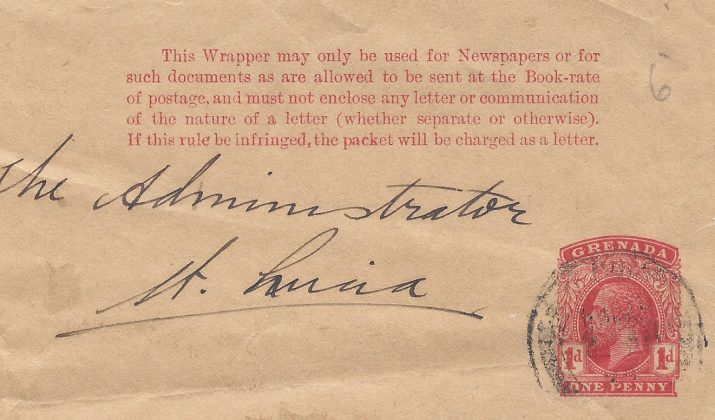 Simon Richards FRPSL has twice suffered the effects of Covid when it came to giving a presentation to the Royal Philatelic Society London. The first date planned had to be postponed. Then, with the re-arranged date of 7 October looming, a member of Simon’s family tested positive, so Simon had to self-isolate.

Fortunately Simon was able to ensure his display of ‘Grenada and other West Indies Postal Stationery’ reached the home of the Royal at 15 Abchurch Lane in the City of London to be enjoyed by members. Plus, thanks to one positive outcome of Covid, through the wonders of Zoom, members were able to watch while Simon gave his presentation from home. An added bonus was that, members, unable to attend the meeting in person, were also able to watch the Zoom presentation.

The Vote of Thanks was given by Simon Greenwood FRPSL, who commented that there was ‘interest wherever you looked’ in the display, noting the paucity of used examples of the stationery. This fact was noted several items by Simon during his talk, often showing the only known used example. One in particular cited: a ¼d wrapper from Grenada of which there were 30 printings with a total of about 1 million produced – yet only one used example is known.

A 1d wrapper of the King George V era from Grenada. Despite the fact that 61,836 were printed, this is the only known used example.