The most amazing display 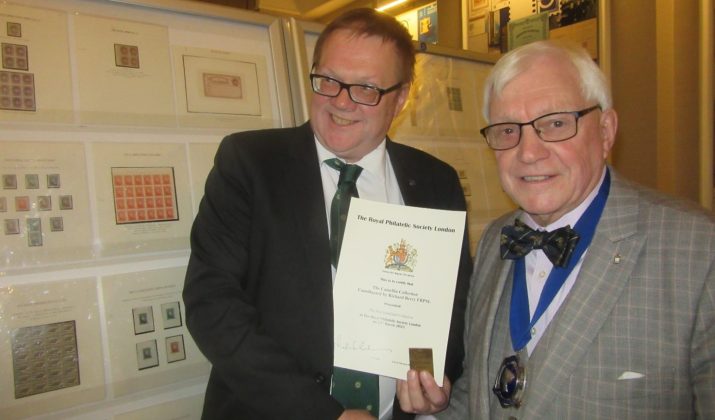 The most amazing display’ was the understatement by Peter Cockburn FRPSL, President of the Royal Philatelic Society London, to describe the collection of Newfoundland shown to the members on 24 March. What must be the most outstanding, comprehensive and complete collection of Newfoundland is the property of Camellia PLC, a global family of companies based in south-east England, focused on agriculture across the world. With some 76,000 employees worldwide it is globally the largest private producer of tea.

The collection was founded some years ago by the then Chairman, and was shown to the ‘Royal’ by its current Philatelic Curator, Richard Berry FRPSL. Yet, despite its undeniable significance, this was the first time any of the collection had been shown publicly.

On display were some of the most significant early letters sent to and from Newfoundland, including Ship Letters and Packet Mail, plus letters from the days when a Post Office was established under the control and supervision of the General Post office in London. Equally impressive is the coverage of the stamp issues, with outstanding multiples, plus essays, die proofs and plate proofs, all immaculate, with clearly only the finest examples chosen to add to the collection. Among the many gems is the unique and exquisite horizontal used pair with full margins of the 1/- value of 1857 from the first stamp issue.

Expressing the thanks of the members, David Beech FRPSL described the material on display as ‘the world’s best collection of Newfoundland, put together over the past 50 years, demonstrating a fine balance from the postal history to the stamps’.

Richard Berry, on behalf of Camellia, accepted the Society’s plaquette from Peter Cockburn. For all those present, it had indeed been a very rare treat.

Trouble logging in to your account? What should you do?