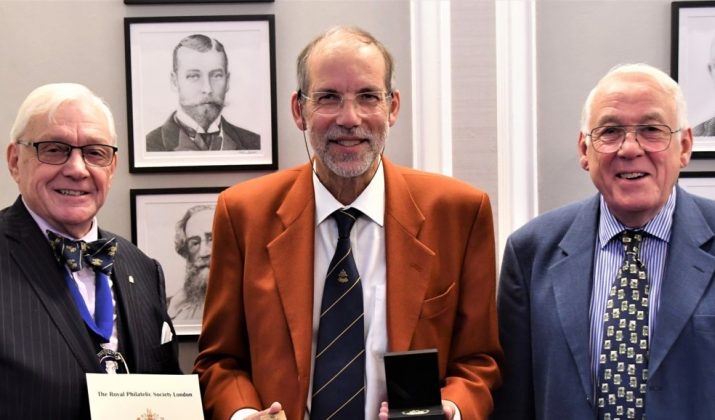 ‘The Postal History of the World: 3000BC to 1940AD’ sounds an impossible task to undertake in a display. Yet it was one that James Grimwood-Taylor RDP FRPSL achieved on 30 September, to the astonishment and delight of over 130 members of the Royal Philatelic Society London.

As James himself commented: ‘It was a rare opportunity to show so much at one time.’ The display fulfilled its aim, including a Sumerian cylinder seal from c3000BC and two 4,000-year-old cuneiform clay tablets, while the earliest letters shown were a vellum deed of around 1175, and a Merchant’s Guild-Mark letter from London to Venice in 1458.

Introducing the display, Peter Cockburn FRPSL, President of the Society, described the items on show as ‘most extraordinary – in every sense of the word’, adding it must have ‘taken a lifetime to amass’. These sentiments were re-iterated by Frank Walton FRPSL, giving the Vote of Thanks, commenting that ‘the material is quite remarkable’. Frank also congratulated James on being invited to sign the Roll of Distinguished Philatelists this year.

In reply James noted that he collects the things he likes, showing in this display Great Britain and 124 other countries. He also thanked Richard Stock, Past President of the Society, for the invitation to give his display, initially postponed as a result of Covid.

It was therefore fitting that Richard should present James with the Society’s Crawford Medal for this year. Awarded for the most valuable and original contribution to the study and knowledge of philately in book form, James received the medal for his two-volume work on International Postal Reforms.