Good to be back! 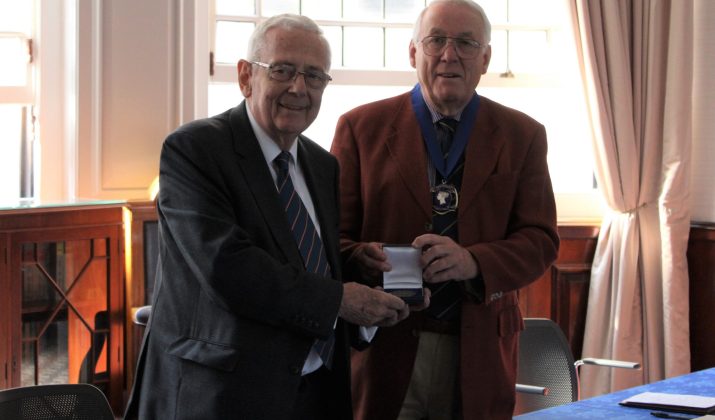 It was a significant, and extremely welcome, return to normal life when 70 members of the Royal Philatelic Society London were able to visit 15 Abchurch Lane in the City of London on 22 July for the first meeting of the Society in nearly 18 months.

It was the perfect way to celebrate, with a display from the Royal Philatelic Collection shown by gracious permission of Her Majesty The Queen, that had been kindly arranged by the Deputy Keeper, Rod Vousden FRPSL. On display was Gibraltar, Malta and Cyprus – ‘The Three Kings’.

Expressing the thanks of all present, Richard Stock FRPSL, President of the Society, reflected how good it had been to see more modern material, that of the reigns of King Edward VII, King George V and King George VI, in this ‘excellent display’.

The material shown included artists’ drawings, essays – at times of unadopted designs, colour trials, proofs, and many plate blocks. Among the highlights for Richard was the £5 definitive of Gibraltar of 1925 in a plate block of four. Princess Elizabeth visited Malta in 1950, for which occasion three stamps were issued. Shown was the artwork and approved proof of the issue, as well as plate blocks, plus a first day cover addressed to Princess Elizabeth. For Cyprus, on display was the very attractive definitive series introduced in 1934, with once more the artist’s sketches shown along with plate blocks and stamps perforated ‘SPECIMEN’.

Closing the meeting, Richard remarked that it had been delightful for members to get together once again.

Collectors of all kinds will meet in Prague in September for the Sberatel / Collector fair!