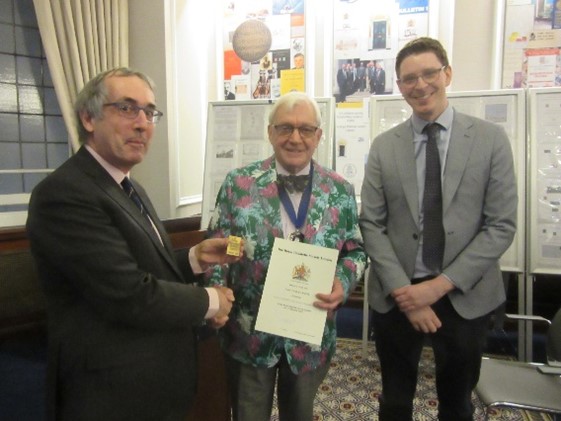 Peter Cockburn FRPSL, President of the Royal Philatelic Society London, gave the presentation at the society’s meeting held on 13 January. His subject was the ‘Foreign Bill and Telegraph Stamps of Ceylon’. The presentation was complemented by a superb display of material, much of which is scarce unused because there was never a great demand from collectors, but equally rare to find used with often just a single example known.

There was a story to be told about most of the items shown. Such as the fact that Foreign Bills, the means by which payment for goods or services was assured, were often sent in twos or threes despatched overseas by different mails and ships, on the basis that at least one would be delivered. Consequently the Foreign Bill stamps were produced in strips of three, inscribed respectively ‘Third of Exchange’, ‘Second of Exchange’ and ‘First of Exchange’.

Giving the Vote of Thanks, George James explained that much of the study into these stamps had only taken place in recent times, with Stanley Gibbons first adding these items to the catalogue in 2012, and much of the material only being offered for sale in 2019. He added that much of the complexity of the subject was caused by the ‘beautiful unbridled chaos of the Stamp Revenue Office of Ceylon’, often ordering vast quantities, such as having sufficient of one value to last 750 years, and resorting to much surcharging as a way of meeting needs as they arose, simultaneously using some surplus stock.

Simon Richards FRPSL, Vice President of the Society, presented Peter with a certificate and plaquette in recognition of his absorbing presentation.