Have you seen Australia’s kangaroo stamps? Do you know the history of these stamps that goes back to 1912? Does that seem late to you? We’ll explain why!

Western Australia, South Australia, New South Wales, Queensland, Tasmania and Victoria. These Australian states issued their own stamps. Most feature Queen Victoria, but also more local images including the duck-billed platypus, a swan or even a kangaroo…which is logical when you know that the animal is typical of this region of the world.

What is unusual is that the different states continued to issue their own stamps even after the Australian Federation was created. According to a study by Jean-Claude Plaisier of the Association Philatélique Lilloise, the first purely Australian stamp was issued in 1912 and was chosen via a contest. The winner was a certain Mr Altmann who made a very beautiful portrait of…George V! He received the sum of 100 pounds for his excellent work. The second and third prizes were awarded to two kangaroo designs. It would seem logical that the first stamps would be based on these subjects, but that wasn’t to be!

Mr Frazer, the Postmaster-General, who was responsible for the selection, decided to get involved too, with the result we know! The press criticised him vehemently because the stamp showed Australia as an empty desert, and the kangaroo, quickly sketched, sometimes looked like a rabbit! However, the first Australian stamp had been created, like it or not!

A first series of 15 stamps of different colours, valued at one half penny to two pounds, was issued between 1912 and 1919. The watermarks differentiate between the various issues.

The first Australian stamps were produced with an “A” watermark. Some subsequent stamps were printed with different watermarks (B and C).
Two other watermarks (D and E) were used for the reprints in 1923 and 1936. The colours of the series also evolved. For example, the rarest stamp, the carmine and black two-pound stamp, was printed in carmine and violet and then in red and black. This major stamp series was used in Australia for many years. The stamps were eventually withdrawn in 1948. 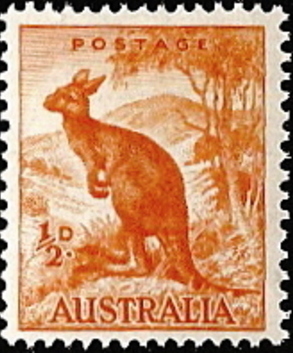 A new stamp with a kangaroo was issued in 1937. This was an orange half-penny stamp. This was again the case in 1959, when a kangaroo hopped on the stamp.

It has appeared most recently in 1995, 2005 and 2011. The kangaroo continues to be a very strong symbol for the country. This friendly and unusual animal is also featured on the stamps of countries like Bulgaria, Hungary and others.

The name “kangaroo” comes from an amusing legend. When the English colonists asked the Aborigines what they called the strange animal, obviously not knowing English, they answered: “Gangurru” which means: “I don’t understand”. They mispronounced it and…the name stuck!

Discover the kangaroo stamps for sale on Delcampe!

Three Iconic Saturn Console Games… It Was Only Yesterday…Or Nearly!