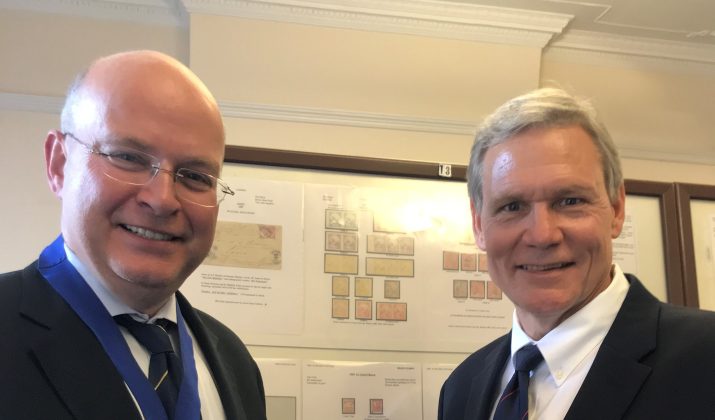 ‘This is not a subject many know.’ This is how Patrick Maselis RDP FRPSL, President of The Royal Philatelic Society London introduced the display by Bryant E. Korn of ‘Postal Stamps and Postal History of Liberia from 1820 to 1920’, shown to the members on 25 April.

The display began with letters sent before the introduction of stamps in 1860. The first stamps were lithographed by Dando, Todhunter and Smith (later T. F. Todhunter), the design depicting Seated Liberty.

For the 1892 issue printing moved to Waterlow & Sons, now using a line-engraved process. Designs took on a more pictorial look with flora, fauna, national symbols and native scenes. Then in 1897 printing moved again, this time to Perkins, Bacon.

However, in 1868 the Liberian Treasury was robbed, including stamps, so the use of stamps was forbidden until mid-1880, mail being sent stampless, except for three known covers, two Official and one Paquebot.

Frank Walton RDP FRPSL thanked Bryant for his ‘amazing display’, adding that Liberia is ‘a tiny country in area, but giant country philatelically’.