Two ‘firsts’ for the Royal 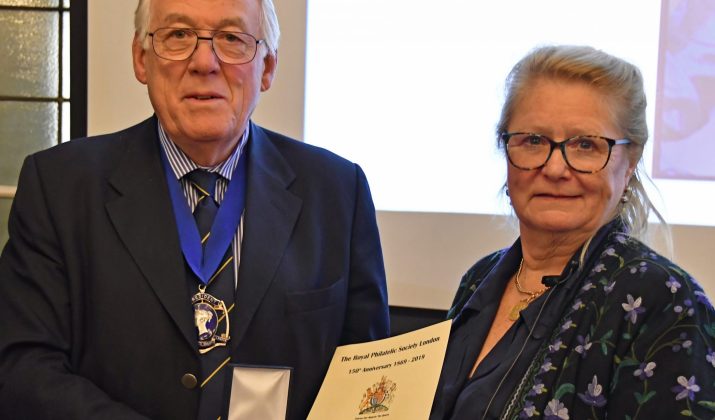 Claire Scott FRPSL achieved two ‘firsts’ on 23 January when she presented ‘On The Fringes of Eastern Seas: Brunei 1895 – 1988’ to the members of the Royal Philatelic Society London. It was the first time that Brunei had been the subject of an entire display to the Society, and the first time that an afternoon display had ben accompanied by a PowerPoint presentation.

The display revealed the fascinating philatelic story of the country, the study of the stamps being accompanied by essays, colour trials and proofs, as well as usage, while also shown were airmails, forces mail, postal stationery and postcards.

Claire’s illustrated presentation complemented the display by providing a clear insight into the historical and postal background of the country.

Giving the Vote of Thanks, Peter Cockburn FRPSL thanked Claire for her ‘wonderful insight into how stamps and postal history impact on a country’s history, the two being intertwined’. President of the Society, Richard Stock FRPSL, presenting Claire with the Society’s 150th Anniversary Medal, further remarked that members had enjoyed ‘an erudite presentation to support a magnificent display’.