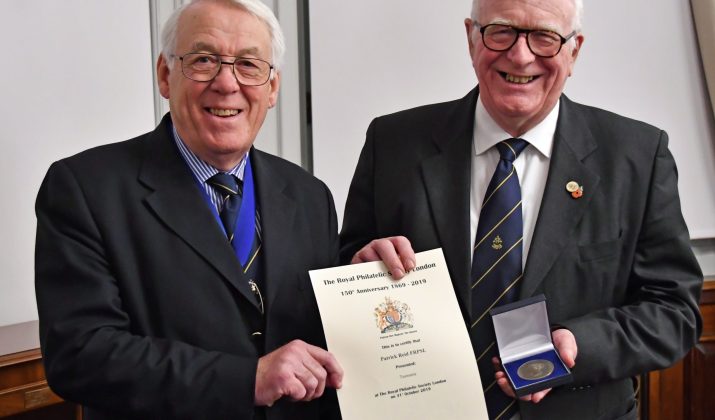 Members of the Royal Philatelic Society London were amazed at the extensive range of material from Tasmania, as perfectly exhibited by Dr Patrick Reid FRPSL in his display given to the Society on 31 October.

The display opened with early letters from Hobart and Launceston, including one sent from Hobart to London in 1823 showing the first dated handstamp in the form of a crowned oval.

In lighter vein came the story of Tattersall’s Lottery establishing by George Adams in the late 19th century. Despite opposition from church and state concerned about the evils of gambling, the business established itself in Tasmania. The Federal Government did its upmost to prevent mail reaching the business, which largely operated from places where men would congregate such as hairdressers and pubs. Today ‘Tatts’ is still very much a part of life in Australia with a Lotto game every two minutes.

The vote of thanks was given by Ben Palmer FRPSL who congratulated Patrick on the ‘extensive amount of material’ he had shown. These thoughts were echoed by President of the Society Richard Stock FRPSL, describing the display as ‘far ranging’.

Following the display those present were able to adjourn for light refreshments to the Members’ Lounge in the Society’s new home at 15 Abchurch Lane in the City of London.

75 years of the Battle of the Bulge, a duty of remembrance…