The story of the One-cent Magenta began in British Guiana. British Guiana (which became an independent nation from Guyana in 1966), as its name suggests, had been an English colony since 1796. This territory is the only Commonwealth state in South America. 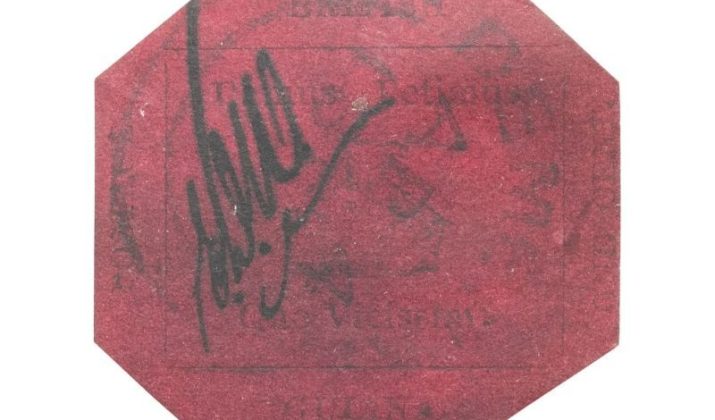 In 1856, British Guiana was waiting for a supply from the famous London printer Waterlow & Sons to complete their soon to be sold-out stock of stamps. But the ship was slow to arrive and the stock was getting thinner and thinner. To make up for this shortage, the local postmaster, Mr. Dalton, approached a Georgetown printer (Joseph Baum and William Dallas), to make an emergency issue of 4c stamps. They were instructed, according to the expert Roland Levêque (in a June 1980 article in Balasse Magazine), to respect the design of the current stamps: a sailboat with Horace’s motto “Damus Petimus que vicissim” (meaning “we give and ask in return”). 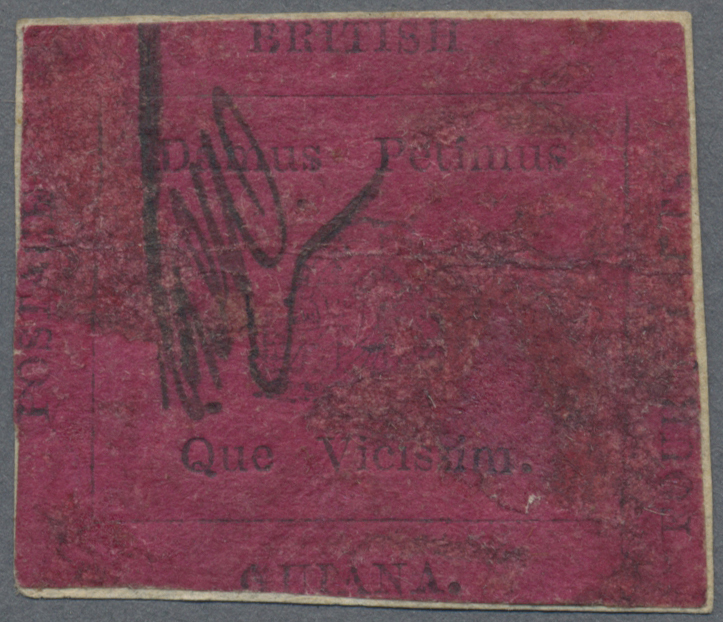 The stamps were printed in black on red and blue paper. The sailboat taken back was the same one that the printers used in their own gazette to announce maritime news. However, while the creation of the 4c stamps is proven with certainty, this 1c is not. It is impossible to say whether it is a trial or a small issue. However, this stamp was applied to a piece of mail and it bears the initials “E.D.W.” for (E.D. Wight), a tobacconist at the time. In fact, tobacconists were instructed to sign the labels before cutting them out to avoid forgery.

This letter, dated April 4, 1856, ended up in the correspondence of a 13-year-old boy, L. Vernon Vaughan, who found it in his attic. The stamp was deteriorated: its corners were cut off and it was damaged when the young boy took it off the mail. He sold it for 6 shillings to a collector named MacKinnon in 1873. This Scottish collector returned to Glasgow with his collection of stamps including the famous One-cent Magenta.

MacKinnon put his stamp collection up for sale which was bought by a dealer named Thomas Ridpath for £120. It was this Ridpath who sold the stamp to Count Philippe Ferrari de la Renotière for £150. Although the stamp and the rest of the collection were bequeathed to the Postal Museum in Berlin in his will, the French state confiscated the stamps as “property of an enemy alien”. The state resold the collection through the Hotel Drouot in the early 1920s. The expert Gilbert was in charge of the sale. The stamp appeared in the catalogue as “doubtful” but this did not prevent the American collector Arthur Hind from buying it for the amount of 352,500 francs. 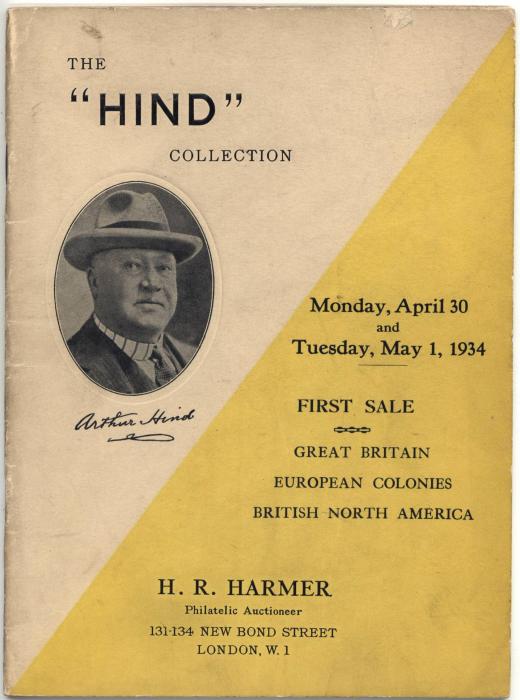 The stamp crossed the ocean and was part of the “Hind” collection until his death in 1933. His will stipulated that his collection was to be sold but the One-cent Magenta was missing. His widow had kept it as a personal gift from her husband.

Mrs. Hind sold the stamp in 1940 to the Stamp Department of the American chain “R.H. Macy & Co” for $37,500 but the chain sold it almost immediately to an anonymous collector for $42,000. It is now known that the collector was in fact Frederick T. Macy and Co. Small, an Australian living in Florida.

For 30 years, the stamp was stored in the vaults of the firm “J. & H. Stolow” in New York. It was returned on March 24, 1970 when it was resold by the Siegel Gallery. Its new owner was a union of eight Pennsylvania industrialists. It was purchased as an investment for the sum of $280,000. 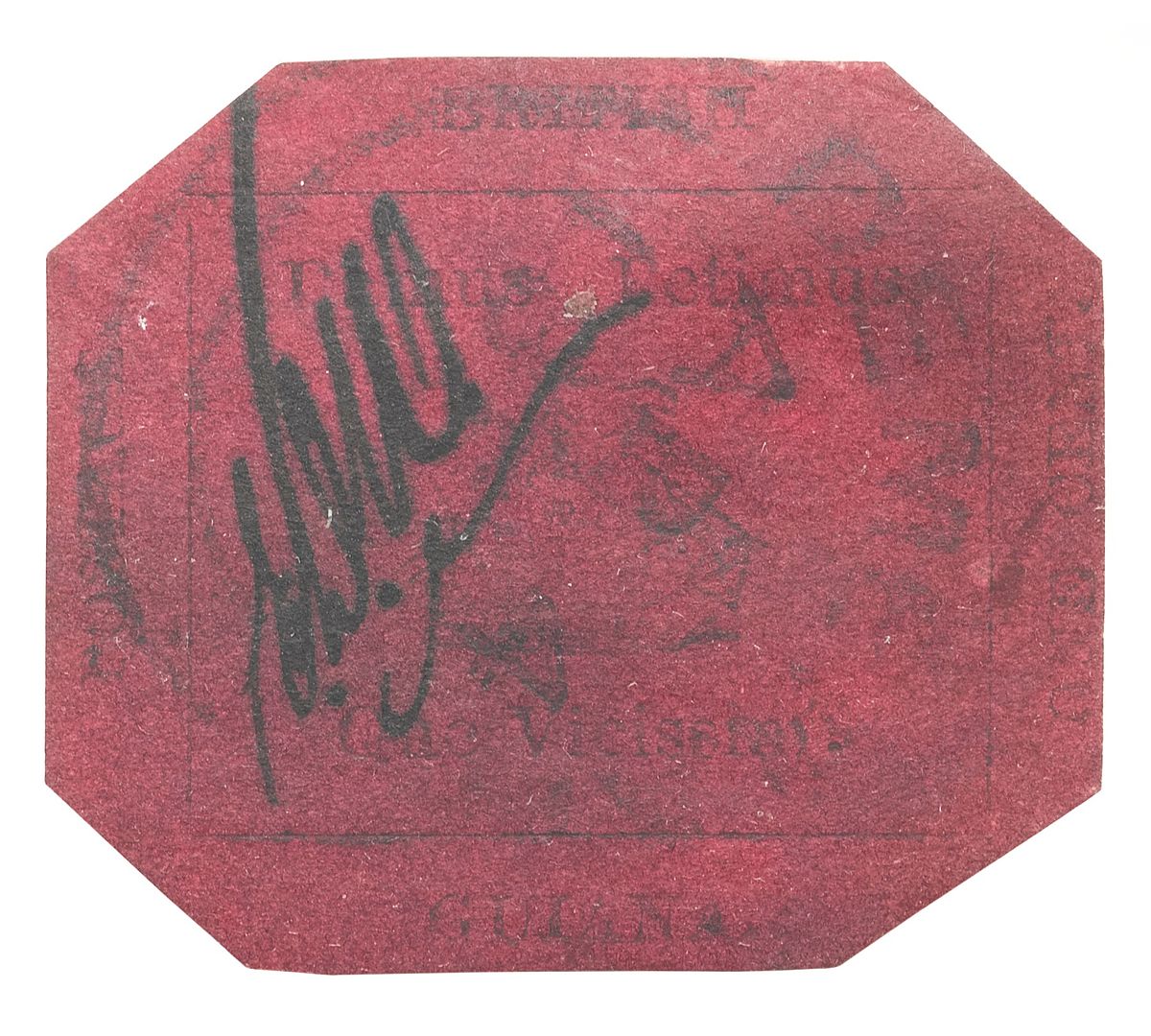 The most mythical stamp

The One-cent Magenta is by far the most expensive stamp in the world today. Since its discovery in 1873, it has been shrouded in mystery: is it real? Were there several of them? On the matter, a rumour tends to say that the stamp existed in duplicate, but that it was the collector who had acquired the first copy who recovered the second one and burnt it before witnesses to possess a unique stamp in the world.
So far, the story is amusing and it has been attributed to the whimsical Ferrari. It was reported in “L’Echo de la Timbrologie” in 1942. However, in 1938 the same story was told in an American magazine, according to which it had been Arthur Hind who burnt the stamp.

Is this true? Is it false? Anyway, the stamp has become a legend and is coveted by the richest philatelists from all over the world.

Add at least one picture per item for sale on Delcampe!