Whether they're Roman or other, ancient coins often have a special history. During the reign of Emperor Trajan, they were used as propaganda tools. In this article dedicated to numismatics, we want to tell you about the aureus, sesterces and other gold and silver coins used to send messages to the population. 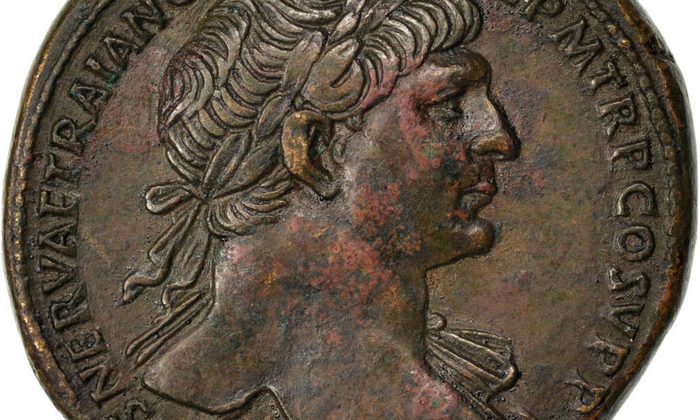 Messages to the population on coins Trajan was one of the emperors to mint the most coins. One reason for this was the devaluation of Roman coinage in AD 107. At the time, he decreased the purity of the silver in the denarius, which enabled him to issue many more.

Trajan used money as a propaganda tool. He had his first coins minted at the beginning of his reign. Their message stated that Trajan had received his power from the Senate. Reverse side of a sesterce with the inscription “optimissimi principi”

In 103, he received the title of “best and most noble prince”. From that time on, the title appeared on all of the new coins issued by the empire.

In 105, when he annexed Arabia Petrae, the coins stated “Arabia adquisita” to inform the population of the expansion of the Empire’s territory. He used the same process for coins from 116 to 117, when Armenia and Mesopotamia were annexed.

Trajan dupondius with the aegis

Laurent Schmitt ofwww.cgbfr.com, wrote an excellent study about Trajan’s aureus in April 2014. Trajan carries an aegis on his left shoulder. This goat skin, which covers his shoulders, is also a propaganda symbol. Note that the aegis is often enhanced with the face of Medusa. For those who don’t know: The Gorgon Medusa had the power to instantly turn to stone anyone who looked at her. Wearing the aegis and decorating coins was a way to express invulnerability from enemies. That was the case for an aureus from 104, the period during which Trajan and the Roman army are at the heart of the Dacian Wars. A coin symbolises the imminent victory of the invulnerable Emperor Trajan over Decebalus, king of the Dacians.

Who was Emperor Trajan? Marcus Ulpius Traianus was born on 18 September 53. Around the year 75, he married Pompeia Plotina, aka Plotina. She had quite a bit of influence over his political decisions.

He became known during the reign of Domitian, of the Flavian dynasty (son of Vespasian). Trajan had concurrent political and military careers.

When Domitian, who was losing his mind, was assassinated in 96 without a successor, Nerva, a 65-year-old senator, very old for the time, acceded to the throne. He did not have a successor either.

At the time, Trajan was the governor of Germania. He quelled rebellions in the name of the Emperor and was very popular with his men. He was proposed as the successor to Nerva. The Senate was split between him and Marcus Nigrinius, one of Domitian’s generals. He was the highly decorated governor of Syria, but didn’t have Trajan’s noble background.

Nerva chose Trajan, whom he adopted in 97. Trajan became emperor in 98. However, he did not return to Rome immediately. On the contrary, he stayed another two years in Germania to consolidate the peace.

When he arrived in Rome in 99, Trajan made a big promise to the Senate: no senators could be executed without a trial. This was a new concept, because many previous emperors had not bothered with procedure.

Trajan was renowned as a conquering emperor. He took part in the Dacian Wars which brought the Empire prestige and a great deal of resources. He also annexed Arabia Petrae. At the end of his reign, he annexed Armenia and Mesopotamia.

Denarius with the effigy of the Empress Plotina

In addition to the annexations, Trajan also did a great deal to expand the city of Rome. He improved the Italian road network and built or expanded several major ports, aqueducts, baths and the Forum.

He was also praised for his social policy, for which his wife Plotina had significant influence. He took care of the poorest citizens and made taxation more equitable in Rome.

Romans remembered Trajan as one of their best emperors. On his death in August 117, following a stroke, his great-nephew and adopted son Hadrian became emperor. On his ascension to the throne, he organised a posthumous triumph and the Senate elevated Trajan to the rank of god.

See all of Trajan’s coins on Delcampe!