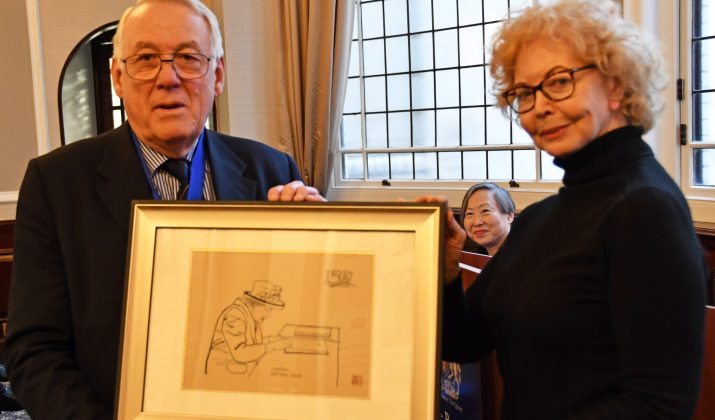 The celebrations of the 150th Anniversary of the Royal Philatelic Society London featured an outstanding event on 29 February when 40 members filled the display frames with ‘Gems of Asian Philately’. The event took place at the Society’s premises at 15 Abchurch Lane in the City of London, with many of the participants having come to London specifically for the occasion.

Thanking all those who were showing, Richard Stock FRPSL, remarked that everyone had enjoyed a wide range of material, from early to modern, ‘all of a high standard’. In particular he thanked Anna Lee, who had coordinated the displays.

To mark the occasion Deirdra Morris presented Richard with a specially created embroidery. Based on a photograph of Her Majesty The Queen signing the Visitors’ Book on opening the Society’s new premises last November, the embroidery by Joni Zhou, one of China’s leading exponents of the art, took two weeks to complete.