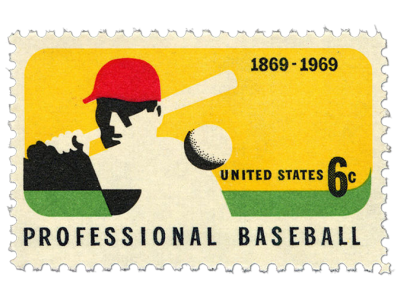 The National Postal Museum’s exhibition “Baseball: America’s Home Run” explores America’s national pastime through the unique lens of stamps and mail. On view Saturday, April 9, through Jan. 5, 2025, it invites visitors to explore exciting and memorable stories about how the game of baseball became an integral part of American history and tradition.

Featuring hundreds of U.S. and international stamps commemorating great players and historic moments, and drawing on original artwork and archival material from the U.S. Postal Service’s esteemed Postmaster General’s Collection, the exhibition approaches the story of baseball from a unique, worldwide perspective.

The display of stamps and mail will be complemented by dozens of objects loaned by other Smithsonian museums, the National Baseball Hall of Fame, law enforcement agencies and renowned private collections that have never before been on public display. These rare artifacts—exclusively shared with the public as part of the exhibition—showcase a treasure trove of historically significant game-worn uniforms, jackets and hats, game-used bats and memorabilia from America’s pastime.

The exhibition pays tribute to many of the game’s greatest legends, including Jackie Robinson, Roberto Clemente, Babe Ruth, Ty Cobb, Lefty Grove, Lou Gehrig and countless others. Of the more than 60 baseball stamps issued by the United States since 1939, the vast majority commemorate individual players. Many of these postal portraits feature specially commissioned artwork designed to mimic the look and feel of classic baseball cards and recall players whose achievements on and off the field made them household names. On display for the first time, original stamp art and production material from the Postmaster General’s Collection is paired with actual game-used artifacts as a powerful visual reminder that these players—whom most know of only from photographs and old footage—were once flesh and blood.

The lives and careers of some of baseball’s greatest players, including those from the Negro Leagues, are examined through the postage stamps that tell their stories. For a number of stamps, the museum is able to show the original artwork commissioned by the U.S. Postal Service, picturing various players along with the actual uniform they wore in the artwork, such as Jackie Robinson’s road uniform from the 1948 season. Uniforms and game-used bats of Babe Ruth, Joe DiMaggio and other great players from the 20th century will be on display.

These tributes are especially meaningful at the 75th anniversary of Robinson being called up to the Brooklyn Dodgers in 1947 as Major League Baseball’s first African American player and the 50th anniversary of Clemente’s death (1934–1972), who was born in Puerto Rico and played 18 seasons at right field for the Pittsburgh Pirates.

“We are proud to have Institution-wide cooperation from the Smithsonian, participation from the greatest organizations dedicated to the sport of baseball and support from businesses and private collectors who love the game,” said Elliot Gruber, director of the museum. “I would like to offer special thanks to the lead sponsors of the exhibition—the Washington Nationals Ball Club, Heritage Auctions, Milwaukee Tool, the National Postal Museum Society, Ricos Products Co. and Smithsonian-published author Stephen Tsi Chuen Wong who also serves as honorary advisor to the exhibition, for their generous support.”

The exhibition will be presented in English and Spanish through a collaboration with the Smithsonian Latino Center, creating broad appeal to collectors of stamps and memorabilia, family audiences and baseball fans.

“Creating Baseball” looks at early U.S. baseball-themed stamps and the myths they reflect about the origins of the sport. The Centennial of Baseball stamp gave tacit federal recognition to the now-discredited claim that Abner Doubleday invented baseball in 1839 at Cooperstown, New York. Similarly, a 1969 stamp honoring Anna “Grandma” Moses shows “July Fourth,” her painting of a small-town Independence Day baseball game, reinforcing misconceptions about the sport’s rural American origins, when it was, in fact, a big-city game that evolved from British antecedents.

“We All Play Ball” examines baseball’s global spread in the late 19th and early 20th centuries. With modest equipment needs, baseball was played by American soldiers on military posts around the world and quickly adopted by local people. International baseball stamps will be complemented by memorabilia and military-issued equipment. Watching and playing baseball helped the Irish, Italians, Jews, Poles and other immigrant groups break down ethnic walls and show their determination to integrate into American communities. Europeans learned baseball in this country, but most Latino immigrants came already knowing and playing the game, making them one of baseball’s fastest growing audiences and comprising more than 25% of professional baseball players.

“The Negro Leagues” takes its inspiration from U.S. Poet Laureate Donald Hall, who described a passion for baseball as “a kind of citizenship perhaps more authentic than anything which can be on a piece of paper.” However, African Americans were denied the opportunity to play Major League Baseball until 1947, so they formed their own professional leagues and teams—in the process reaffirming their Americanness to a country that refused to acknowledge their equality.

“Legendary Playing Fields” explores the sense of community that accompanies the familiar surroundings of a favorite baseball park—whether it is a classic stadium like Wrigley Field in Chicago or a newer green cathedral such as Washington, D.C.’s Nationals Park. In the early years, stadiums were generally built on undesirable land in the worst parts of town. One of Washington’s earliest baseball grounds, Capitol Park, was located in an underdeveloped working-class Irish neighborhood dubbed Swampoodle for the tendency of its unpaved streets to flood. Coincidentally, this very plot of land is now the home of the National Postal Museum. “Baseball: America’s Home Run” explores the history of Capitol Park and other parks, including production material for the 2001 U.S. Postal Service’s stamp, Baseball’s Legendary Playing Field Issue, paired with signs, seats, architectural elements and other artifacts from the stadiums depicted on the stamps.

A special website makes available the stories, themes and historical artifacts presented in the exhibition, and it provides multi-media storytelling by some of the most significant organizations and people associated with the game of baseball. Schedules and information regarding public programing and events associated with the exhibition are outlined as well, providing experiences for both on-site and online visitors.

About the Smithsonian’s National Postal Museum

The National Postal Museum is devoted to presenting the colorful and engaging history of the nation’s mail service and showcasing one of the largest and most comprehensive collections of stamps and philatelic material in the world. It is located at 2 Massachusetts Ave. N.E., Washington, D.C., across from Union Station. The museum is currently open Friday through Tuesday, 10 a.m. to 5:30 p.m. For more information about the Smithsonian, call (202) 633-1000.

A little-known face of great value!