Something of Great Britain for all 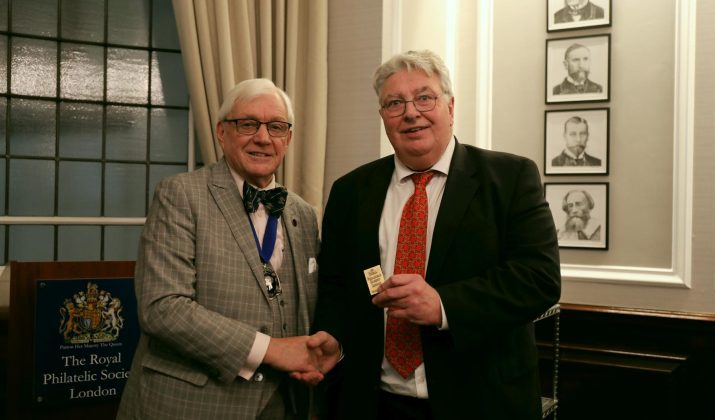 With no fewer than 62 one-frame displays to view, the members of the Royal Philatelic Society London were given a rare treat when they were entertained by the Great Britain Philatelic Society on 1 December. Understandably, it proved to be an extremely popular event, with over 150 attending.

The person who brought it all together was David Griffin, who ensured that every Great Britain interest was catered for, with stamps of all reigns from Queen Victoria to Queen Elizabeth II, including postal stationery, rolls, booklets and postage dues, plus various aspects of postal history, and even parcel labels, rocket post, meter marks and perfins.

As Richard Berry FRPSL remarked when giving the Vote of Thanks, there had been a ‘judicious selection of material so as to provide something for everyone’. In reply, Peter Lister FRPSL, President of the Great Britain Philatelic Society, thanked all those who had come along to the meeting.

A certificate of appreciation was presented to all who had displayed by Peter Cockburn FRPSL, President of the Royal Philatelic Society London, who in addition presented a plaquette to David Griffin in recognition of his fine achievement in bringing the magnificent displays together.