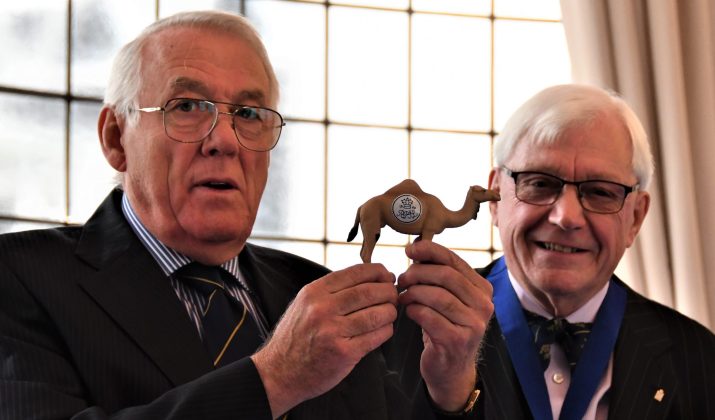 It was almost a year ago that Richard Stock FRPSL, as President of the Royal Philatelic Society London, intended to give a presentation to the society of The Stamps and Postal History of Sudan. It finally happened on 29 July, and proved to be well worth the wait, providing a magnificent display covering all aspects of this fascinating country and its legendary stamps depicting a Postman astride a Camel.

The comprehensive presentation ranged from early mail, the expeditions to the area in the late 1880s, the need for distinctive stamps and the development of the postal services, censored mail, the river and rail travelling post offices, postage due stamps, to unusual postmarks and postcards. Following the use of overprinted Egyptian stamps as a provisional measure in 1897, Richard Stock’s collection fully traces the development of the Camel Postman design, introduced on 1 March 1898, with essays, proofs and colour trials.

In addition to Sudan, Richard also showed campaign mail from the Boer War, and a selection of the exquisite recess printed definitives from the early years of Queen Elizabeth II’s reign.

Giving a vote of thanks Frank Walton FRPSL remarked that the presentation provided the perfect example of the best way to put together an exhibit, with postal history and classic material, including trials, essays and blocks, all beautifully presented.

The display was followed by the Society’s Annual General Meeting, at which Richard Stock completed his two years as President, years that have been extremely challenging. The Society’s premises at 15 Abchurch Lane, in the City of London, have for much of the time been forced to remain closed, while meetings and events had to be cancelled, albeit the advent of Zoom has enabled a much larger audience to enjoy presentations, and will continue to do so.

Elected President was Peter Cockburn FRPSL, joined by Vice Presidents, Mike J. Y. Roberts FRPSL and Simon Richards FRPSL. The Hon Secretary is Jon Aitchison FRPSL, and the Hon Treasurer is Alan Druce FRPSL. One of the first tasks of the new President was to thank Richard for his Presidency, and to offer his own thanks for a ‘fantastic display’ by presenting Richard with a model camel.

The meeting ended with presentations of the Society’s awards for 2021 to recipients able to be present. The Tilleard Medal for the best afternoon display was presented to Colin Hoffman RDPSA, FRPSL for ‘Rhodesia 1890-1924’. Three members who have provided exceptional service to the Society were presented with the London Medal, namely: Gwynn Harries FRPSL for his work in the Society’s library; Michael Pitt-Payne FRPSL who has been the main Society photographer for more than fifteen years; Nigel Gooch FRPSL for facilitating major donations to the ‘Tomorrow’s Royal’ appeal, created to ensure the Society’s position as the world’s leading philatelic society.

Talks available to all