There are thousands of Statue of Liberty postcards. But, do you know Miss Liberty and her cousins? Discover the thousand and one facets of Miss Liberty, from her creation to the statues that pay her homage! 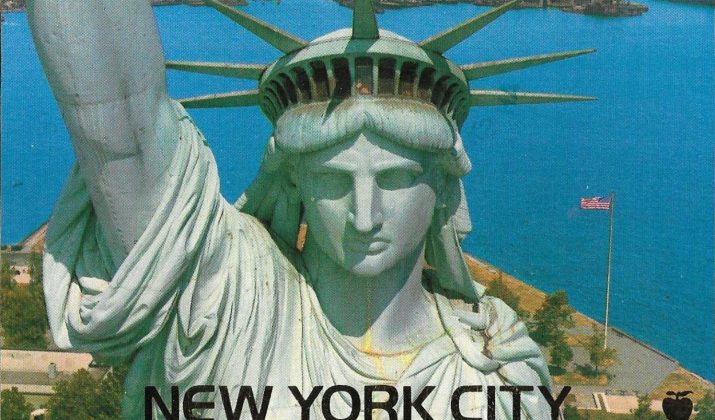 The history of the Statue of Liberty 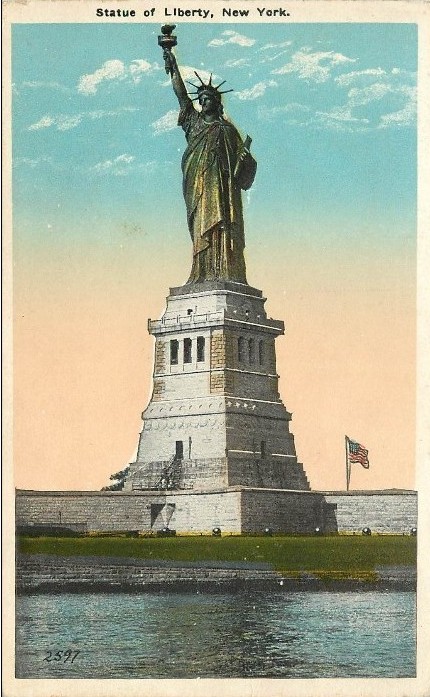 The Statue of Liberty: Postcard

The Statue of Liberty’s full name is “Liberty Enlightening the World” and it’s one of the best-known monuments of our planet. Appearing in countless films, she has been used by advertisers and remains one of the great symbols of New York and of the United States in general. She became a national monument in 1924 and was entrusted to the National Park Service in 1933.

She is located south of Manhattan on Liberty Island, next to Ellis Island, where immigrants used to arrive on American soil from Europe in the 18th and 19th centuries.

The statue was designed by the sculptor Auguste Bartholdi and built in France. The project was entrusted to him in 1871 based on a sketch he had made a year earlier. The draft is currently on display at the Beaux-Arts Museum in Lyon.

The idea for the statue is attributed to the politician Edouard de Laboulaye, a French Americanophile. The idea was to inaugurate it on 4 July 1876 for the hundred-year anniversary of the United States’ independence. Unfortunately, it wasn’t inaugurated until ten years later, in 1886. 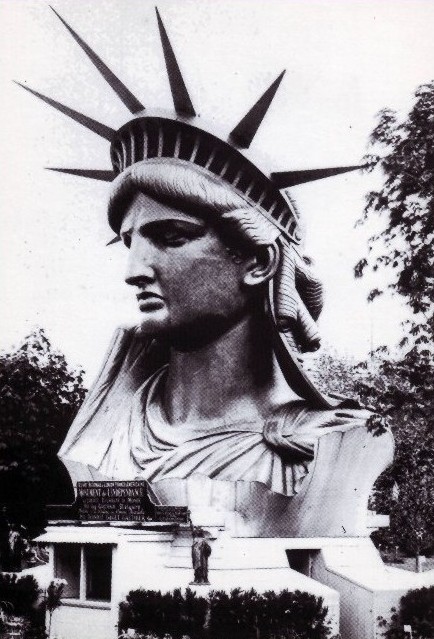 The Face of the Statue of Liberty in Paris: Postcard

A sculpture this monumental deserved a pedestal which matched its charisma. It was the Americans’ job to create one while the job of creating and assembling the statue was up to the French.

The design of the structure was entrusted to the architect Gustave Eiffel, to whom we owe the eponymous tower. The structure was covered with copper leaf. The different parts of the statue were assembled in Paris. This work method enabled many French people to see it before it left for the New World.

Miss Liberty was officially presented in France on 4 July 1884. It took another two years to disassemble her, ship her and reassemble her on her pedestal.

Building the Staue of Liberty in New York: Postcard

The statue was inaugurated on 28 October 1886 in the presence of President Cleveland. The monument very quickly received many visitors. Millions of visitors still come every year. The statue’s first purpose was to be a lighthouse, which it was from 1886 to 1902.

The Statue of Liberty was first damaged in 1916 following a munitions explosion in Jersey City. The explosion resulted in a great deal of damage and made visiting the torch impossible because it was too dangerous.

The statue underwent extensive renovation from 1983 to 1986, which was essential to its upkeep. The Statue of Liberty was in great need of major repairs. American Express was a major donor and used Miss Liberty as a promotional item. The statue was reopened to the public the day after Independence Day 1986. The torch, however, was replaced. The old one is now in the structure’s hall.

The symbolism of the Statue of Liberty 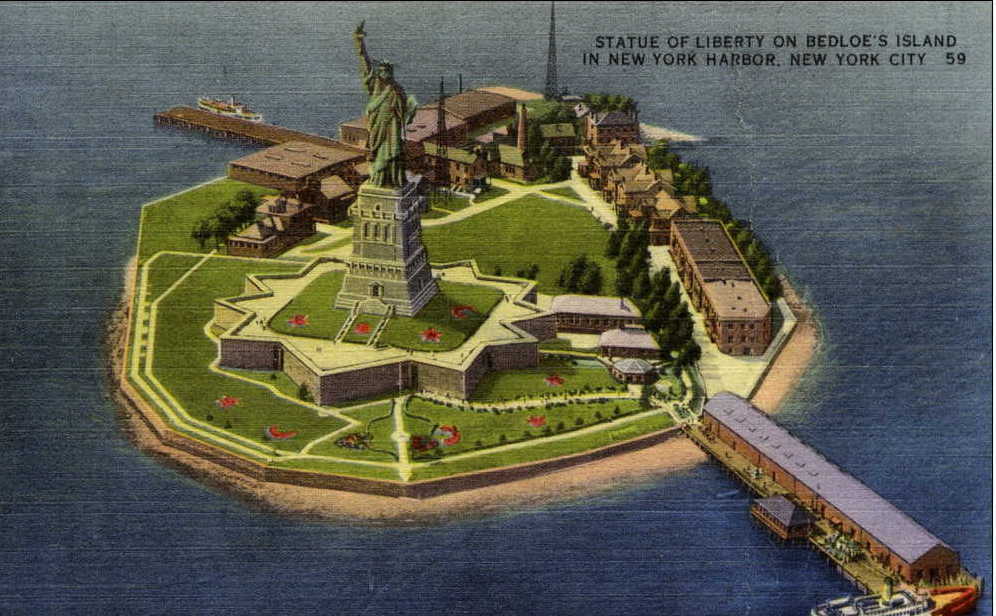 The choice of Bartholdi’s drawing for the Statue of Liberty was not insignificant. The 46.5 metre tall statue (92.9 metres with the base) contains many symbolic elements.

The tablet she is holding in her left hand is inscribed with the date of the United States’ independence. Her diadem consists of seven branches which honour the seven continents (as they were counted at the time) and the seven oceans.

Her feet crush a broken chain, symbolising the strength of freedom over slavery.

The light with which she illuminates the world may refer to the wise minds of the Enlightenment, although other, distinctly more far-fetched theories mention the “The Illuminati Torch of the Freemasons”. These theories may be correct, but we shouldn’t forget that the statue’s first function was simply to be a lighthouse.

Statues of Liberty around the world!

Research about Statue of Liberty postcards reveals that Miss Liberty has many cousins in the four corners of the world. It would be impossible to list them all because there are just too many. However, they can be found in China, Japan, Australia… There are more than a hundred in the United States alone!

But, we can’t speak on the topic without referring to some of them which have become beautiful postcard subjects. We’ll only talk about the statues made before 1913 with a direct link to the designer, Bartholdi.

The Statue of Liberty in Paris, Quai de Grenelle: Postcard

An exact replica of Miss Liberty faces her from the Grenelle Bridge in Paris. This is a smaller version standing at only 11.5 metres. The replica was installed just three years after the inauguration of her older sister.

Before the statue was designed on a larger scale, Bartholdi had created a plaster statue. It was bequeathed by his widow and is housed in the Musée des Arts et Métiers de Paris. After this model was created, a bronze one was made and has been in the Jardin du Luxembourg since 1900.

The Statue of Liberty in Saint-Cyr-sur-Mer: Postcard

There is also one in Saint-Cyr-sur-Mer (Var), also signed by Bartholdi, which was inaugurated in 1913.

The one in Poitiers is from 1903. It is located on the Place de la Liberté. The statue didn’t give its name to the square, given that it was named in 1900. It was a gift from the local Masonic Lodge. 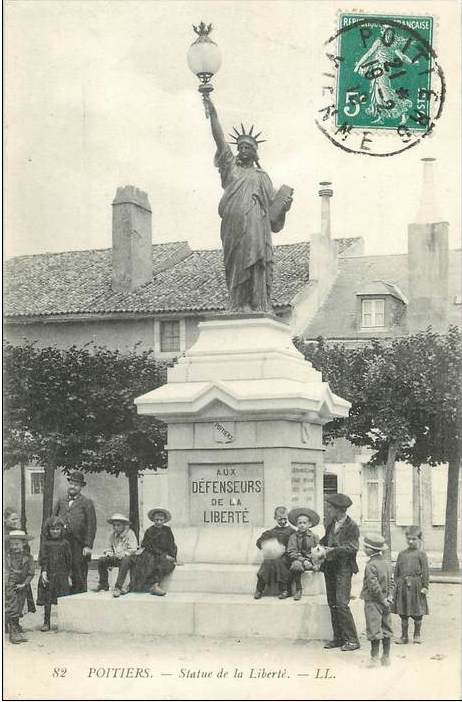 The Statue of Liberty in  Poitiers: Postcard

There is a building in Roybon in the Isère department which is dedicated to the Republican Henri-François Saint-Romme. It is home to a copy of the Statue of Liberty which Bartholdi gifted to Mathias Saint-Romme (the son of Henri-François).

An exact replica of the Statue of Liberty was inaugurated on 7 December 1882 in Cléguérec, in honour of Sergeant Pobéguin. It was cast in 1875, pre-dating its American cousin.

The Museum of Franco-American Cooperation, at Blérancourt in the Aisne department, has a terracotta statue of Miss Liberty. It was made in 1885 by Bartholdi himself.

Rio de Janeiro acquired a nickel statue in 1899. It was ordered from Bartholdi by José Maria da Silva Paranhos Junior. The family owned the statue until 1940.

A statue was purchased by the municipality of Belgrano, near Buenos Aires in 1910. It was apparently cast in the same mould as the statue in Paris.

I can’t say that this is an exhaustive list given that there are so many Statues of Liberty. Discover hundreds of Statue of Liberty postcards for sale on Delcampe!

Who are Wallace et Gromit?