The FEPA Board has carefully considered the nominations for awards made by its Member Federations and is delighted to announce the recipients of the Medal for Exceptional Service to Organised Philately and of Certificates of Appreciation and Merit for 2020. (Press Release from FEPA) 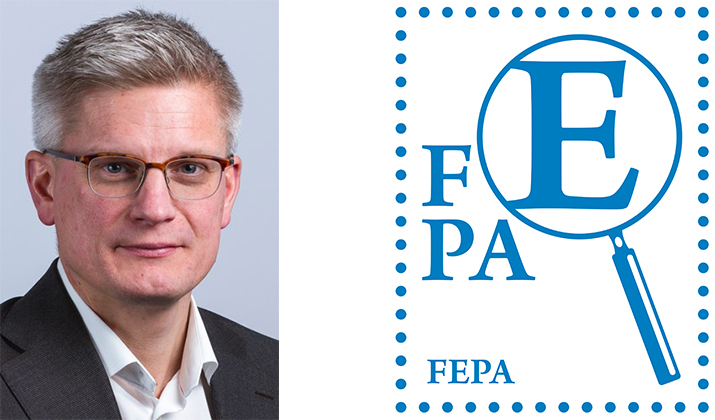 They are as follows:

THE FEPA MEDAL 2020 FOR EXCEPTIONAL SERVICE TO ORGANISED PHILATELY goes to:

Even though he is still relatively young Jonas Hällström has already given an exceptional amount of service to European philately. Highlights include Stockholmia 2019; Five international Philatelic Summits; More than 50 philatelic publications including several books; International large gold in thematic philately; and many other achievements. At the core of his achievements are his extraordinary ability to develop new original concepts, his capacity to bring outstanding organizational skills to bear in making these concepts reality, and his unselfish drive to help other philatelists get the most joy out of their hobby through education, networking, and social interactions.

Jonas Hällström started his mission as editor of the Swedish magazine for thematic philatelists for 12 years and as chairman of the Swedish judging committee for 9 years. The crown jewel in his educational efforts was the “Philatelic Summit” concept he developed and executed to facilitate international exchanges of ideas and best practices in judging and exhibiting. Philatelists from almost all FEPA member countries participated in the Summits, and they took all the educational tools, concepts, and ideas that Jonas and his selected speakers provided back home to their FEPA member federations so that countless additional European philatelists benefitted from the summits even if they were not present.  The Stockholmia 2019 exhibition was a logical culmination of Jonas’ two decades of educational and social networking efforts. This perfectly executed exhibition gave exhibitors and judges the chance to show what they had learned and achieved. A firework of social events nourished the joy, international friendships and understanding that are so important for the future of philately.

FEPA CERTIFICATE OF APPRECIATION FOR OUTSTANDING ACTIVITIES TO PROMOTE PHILATELY

Certificates of Appreciation have been awarded to the following societies:

With over 200 members, the St.Pölten Philatelic Society is one of the largest in Austria. It celebrated its 100th anniversary in 2020 and has been fostering friendly relations with Heidenheim/Germany, Clichy/France, and St. Gilles/Belgium for over 50 years, with an annual meeting being hosted in turns by the four partners. Furthermore, a philatelic exchange has been maintained twice a year for the past 25 years with St. Pölten’s twin-city of Brno/Czech Republic. There are not many clubs that have stayed true to the spirit of European philatelic cooperation for so long, in good times as in bad. It is this tradition that has also formed many a personal friendship, leading to repeated private reunions, thus further strengthening, and promoting the European idea.

The society is a long-term promoter of postal history among the philatelic and general public in the Czech Republic. It actively promotes the philatelic activities of its members including radio/TV speeches and printed media articles. ČMSPH also supports the virtual philatelic exhibiting at EXPONET and the e-presentations at YouTube and other social media. The ČMSPH society has published a printed bulletin since 1986 for members and for collectors in other friendly clubs (Contractory Post Offices, Field Post Section, Registration Labels group etc.). Its members have participated in the philatelic exhibitions not only as exhibitors but also as the members of the organizing committee, national commissioners as well as jurors. Furthermore, they support the Union of Czech Philatelists as board members. The CMSPH runs study projects, and is also open to collectors of picture postcards and autographs.

The beginnings of organized philately in the club can be dated back to 1930, but the society was formally founded in 1946. In 1957 it celebrated its tenth anniversary by organizing the first class-3 competitive exhibition. Over the decades this was followed by other class-3 and -2 events. In 1989 it celebrated the partnership between Nogent sur Marne and Siegburg, together with the Association Philatélique Nogentaise, by organizing a “German-French Stamp Salon”. The society started its membership magazine Phila-Report in 1997 and has published works on postal transport in the Siegburg region and on the postmarks of Siegburg. With 114 members, the Siegburger Briefmarkenfreunde e.V. has built one of the biggest clubs of the Philatelistenverband Mittelrhein regional association. They are a modern club that does not confine itself to organizing exclusively philatelic events but also has a very lively social programme involving its members´ families.

CIFO was born in 1992 and brings together philatelists with a common passion for definitive stamps of the Italian area and their postal historical study. It has become internationally popular during the last year thanks to the “Philatelic Fridays”, a videoconference programme started immediately after the first lockdown to overcome isolation due to the pandemic. This programme, now operated together with the CIFT, very often reaches hundreds of participants from all over the world. Furthermore, CIFO has longstanding experience in virtual exhibitions as it started its CIFO-Net in 2014 and ran seven editions up to 2020. Together with the CIFT it has organized PHIL-Italia 4.0, a virtual exhibition patronised by the Federazione fra le Società Filateliche Italiane (FSFI) during May-June 2021. The 159 CIFO members receive a monthly social magazine, sometimes integrated with special studies. The Association website is a much-appreciated source of information about CIFO life as well as a reference source for its members. Since 2018 the Association has granted a scholarship to a young graduate in historic or economic disciplines working on a dissertation on communications.

Leeds Philatelic Society, one of the oldest in the United Kingdom, has for over 131 years promoted the study, knowledge, application, and advancement of philately in this large, ethnically diverse city. Regular meetings have been held in the heart of the city, uninterrupted by two world wars and the recent pandemic, which presented most societies with a major challenge. The committee of LPS was determined to continue its usual activities during this time by supporting and meeting with members. LPS contributed to wider discussions at the Association of British Philatelic Societies (ABPS) committee meetings, with the aim of encouraging other societies to adopt ZOOM techniques to keep going. A LPS PowerPoint presentation, considering how the effects of the pandemic might affect the longer-term future of philatelic societies, was originally presented at an ABPS committee meeting, and then made available at the First Virtual Stampex 2020.

The Club has only 9 years of tradition, having been founded in April 2012. It is the first and only internet philatelic club affiliated with the Polish Philatelists Union. Today i-KF comprises 146 members and is growing year by year. The achievements of the club include being very active in the internet by publishing philatelic articles twice a week, by organizing and hosting since September 2016 the Digital Library of the Polish Philatelic Literature, open for all friends of philately, and since August 2018 by organizing and hosting The Gallery of Polish Philatelic Jewels.

.ABPS News is the journal of the Association of British Philatelic Societies. It has appeared four times each year since 1994. It is dedicated to promoting philately in the UK and provides an invaluable mechanism for sharing information, news, views and advice on best practice between the Association and its member societies. During the pandemic it has been especially active in encouraging societies to continue their activities using Zoom technology, giving advice to presenters on how to prepare slides using Powerpoint or equivalent programs, and urging them to prepare for a future in which technology will probably continue to play a major part in meetings and displays alongside more traditional methods. It has also moved rapidly towards digitisation of its regular issues which has given it increased flexibility in publication and distribution, and has enabled it to reduce its carbon footprint. Under its current editor it has become more innovative and has sought to bring a sharp insight to discussions about the future development of organised philately. It provides an excellent example of how interactions between a national association and its members can be developed in a mutually-beneficial way.

Two other FEPA awards will be announced in July.

THE FEPA MEDAL 2020 FOR EXCEPTIONAL PHILATELIC STUDY AND RESEARCH

Due to the exceptional circumstances this year it has not been possible this year for the Board to meet in person to evaluate the works nominated, An evaluation will accordingly be carried out by philatelic literature experts to advise the Board which will then decide the winner by videoconference.

THE FRANCIS KIDDLE MEDAL 2020 FOR THE BEST PHILATELIC WEBSITE

In recognition of the important role that on-line communications have played in maintaining philatelic activities during the pandemic, the FEPA Board will award an additional medal for the best philatelic website based on nominations from its Member Federations and from a group of experts in digital technology.

The FEPA Board extends its warmest congratulations to all who have received awards this year and thanks them for the great contributions they have made to philately in Europe.

Arrangements will be made to present these awards at the first convenient opportunity.