Old-time trades? Discover them with postcards!

Technological developments have sounded the death knell for many professions. Grinder, clog maker or lamplighter are some of them. Postcards enable us to rediscover these forgotten jobs carried out by talented craftsmen. Let's discover these old-time trades with postcards! 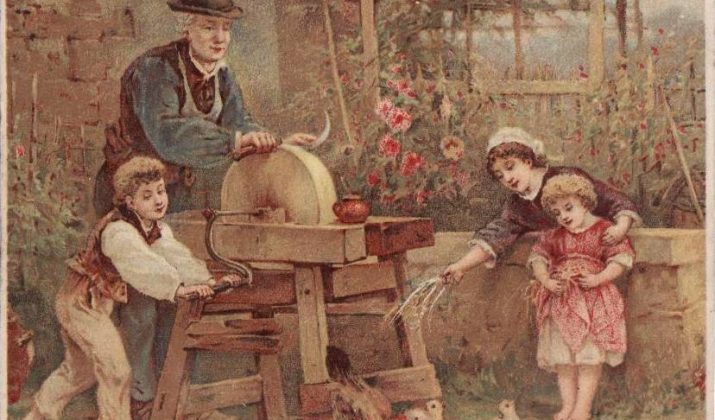 This is a profession which is no longer relevant today and which nevertheless had its heyday at the end of the 18th century and at the beginning of the 19th.

When Saint-Exupéry depicts this astonishing character on the fifth planet in his book “The Little Prince”, he writes poetically: ” When he lights his street lamp, it is as if he brought one more star to life, or one flower. When he puts out his lamp, he sends the flower, or the star, to sleep. That is a beautiful occupation. And since it is beautiful, it is truly useful.””

The lamplighter appeared during the industrial revolution at the end of the 17th century. The function was initially to light lanterns with candles. Street lamps appeared in Paris in 1766, a century later. They would be the invention of the abbot Matherot de Preigny and Mr Bourgeois de Châteaublanc. At the beginning, the streetlight was initially lit with oil, before switching to gas lighting around 1820.

The job of street lighter, although demanding because it was subject to bad weather and was exhausting, was generally a complementary activity. Indeed, the tours, at dawn and at dusk, did not take up a full day.

This old-time trade died out with the advent of electric lighting. As early as 1878, on the occasion of the Universal Exhibition in Paris, several locations were equipped with this new type of lighting, which gradually replaced gas and thus lamplighters. The trade was permanently abandoned in the first half of the 20th century. Until the last century, it was not uncommon in the countryside to wear clogs. Before the introduction of clog-making machines, from 1919 onwards, a craftsman carried out this task. He was called the clog maker.
There were two types of clog makers: those who made the outside shape and those who carved the inside of the clog.
The clog maker started by cutting the wood into logs of the size intended for the clog. Then, with an axe, he cut the wood into the shape of the clog. Afterwards, the clog was carved without being damaged.
When a pair of clogs was regularly worn, it wore out in a maximum of two months. To make them last longer, the soles were often reinforced.
Currently, there are still a few clog makers, but it is a disappearing craft as clogs have been replaced by shoes. It’s a very old trade. It is said to date back to the 14th century. The work of the grinder consisted in sharpening knives, scissors or daggers using a grinding wheel. The grinder travelled from village to village with his equipment in order to sharpen cutting utensils.
Initially carrying his grindstone on his back, he then switched to the wheelbarrow and then to the cart to facilitate transportation.
The guild of grinders was recognized in the 15th century. A few years later, it was joined by the guild of cutlers. Their patron saint is Saint Catherine.
The profession of grinder lived on until the 20th century, when knives started to be made of better quality steel, no longer requiring regular sharpening.
Therefore, their cries and the noise of the metal on the grindstone which animated the villages as they passed through, became a thing of the past. old postcard – drawing of a grinder

In conclusion, as witnesses of the past, postcards present us with these trades that have been completely forgotten nowadays. Clog makers, grinders and lamplighters are only three of many. Want to discover more? Discover the category “trades” on Delcampe !

The feedback system on Delcampe: a trust label