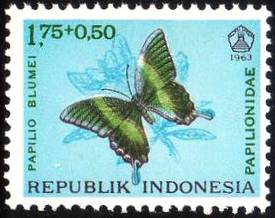 In a world filled with technology, some of the most sophisticated designs exist in nature. Butterfly wing anatomy, for example, is delicate, complicated and efficient (Figure 1 – Australia 1983 Presentation Pack with butterfly wing structure). Butterflies are beautiful: like tiny shingles on a roof, microscopic overlapping scales cover the wings with brilliant, iridescent colours. Iridescent colours have long fascinated scientists. 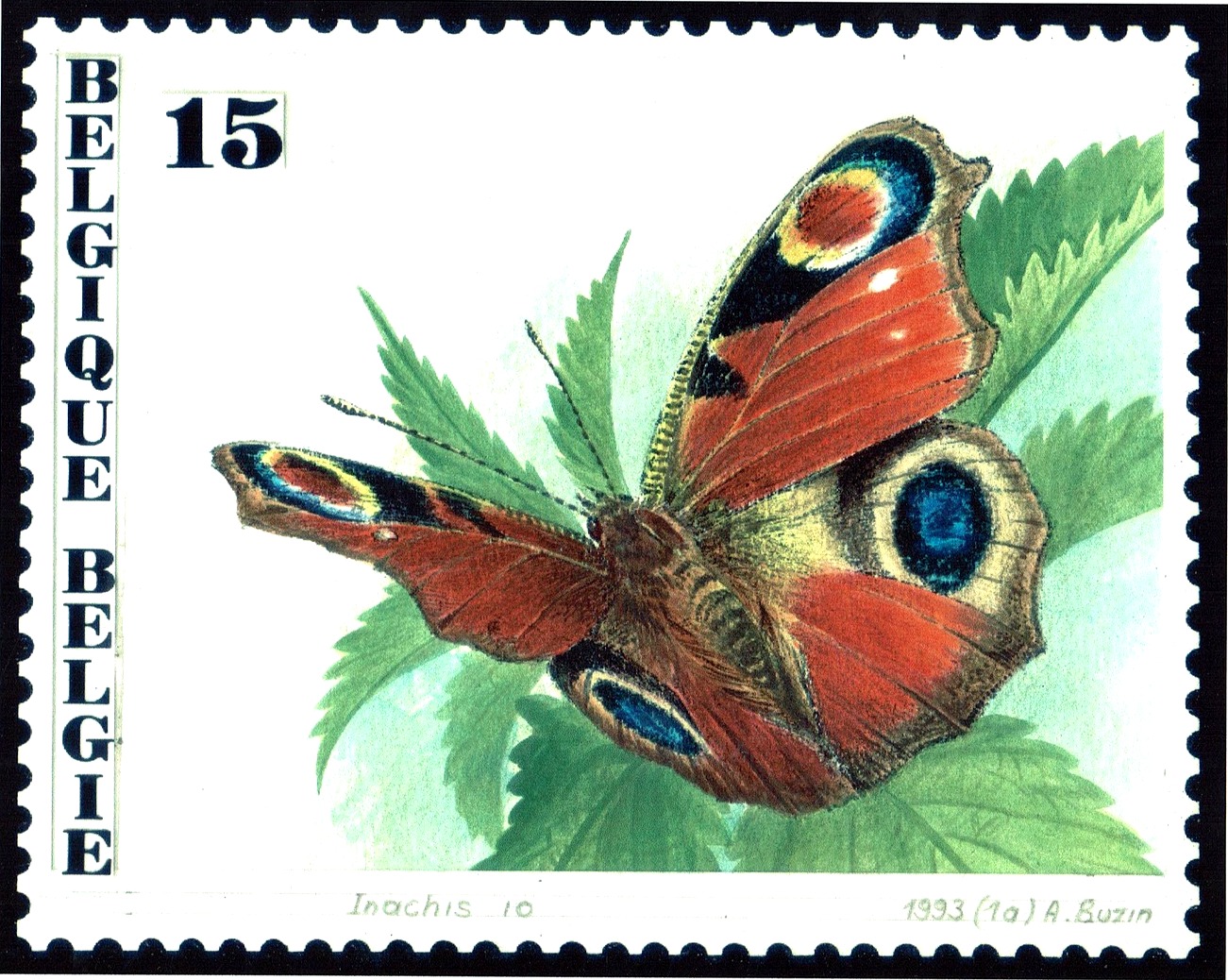 Iridescent colours have long fascinated scientists. In 1634 Sir Theodore de Mayerne, physician of the English king Charles I, observed that the “eyes” on the wing of the peacock butterfly “shine curiously like stars, and do cast about them sparks of the colours of the rainbow” (Figure 2 – Proof of Belgium stamp 1993 with Peacock butterfly – Inachis io). This observation was soon further developed in England. One sunny afternoon in the 17th century, the Oxford physicist Robert Hooke discovered something that has gone down in history. Wondering why the colour of peacock feathers changed if viewed from different angles (called iridescence), he plunged a feather into water and made an astonishing discovery: the colour disappeared. “Fantastical”, he wrote. Robert Hooke was trying to understand how the wings of butterflies and peacocks, which are made of the same material as our fingernails and hair, could produce colours of such brilliant quality. Using a microscope, Hooke saw that the peacock feather and the wing of 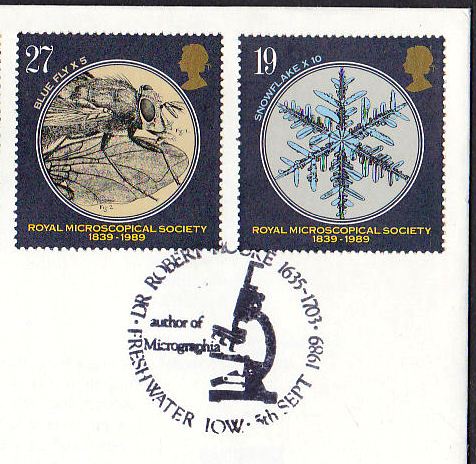 the peacock butterfly were covered in tiny ridges (Figure 3 – Special cancel of Great Britain 1989 with Dr. Robert Hooke and microscope). He concluded that this was evidence that light reflection and refraction were behind colour.

Hooke was on the right track. The bright, often iridescent colours of bird plumage, insect cuticle and butterfly wings are ‘structural’; produced not by light absorption by pigments, but light scattering from a regular array of objects just a few hundreds of nanometers (millionths of a millimeter) in size. This scattering favors particular wavelengths depending on the size and spacing of the scatterers, and so it picks out specific colours from the full spectrum of sunlight. Because the precise hue may depend also on the viewing angle, structural colours are often iridescent, changing from blue to green or orange to yellow. And because they involve reflection rather than absorption, these colours

can be startlingly brilliant. The Blue Morpho butterflies of South and Central America are visible from a quarter of a mile away, seeming almost to shine when sunlight penetrates the tropical forest canopy and bounces off their wings (Figure 4 – Imperforated stamp of France 1976 with Blue Morpho butterfly in Guyana).

Structural colours are just one example of how living organisms manipulate and channel light using delicately arranged micro- and nanostructures. These biological designs offer inspiration to engineers seeking to control light in optical technologies, and could lead to more brilliant visual displays, new chemical sensors, and better storage, transmission and processing of information.

The butterflies Morpho peleides (Figure 5 – Stamp of Costa Rica 1998 with butterfly Morpho peleides) and Morpho rhetenor (Figure 6 –  Stamp of Guyana 1978 with butterfly Morpho rhetenor) obtain their dazzling blue colour not from simple multilayers but from more complex light-scattering nanostructures made from chitin, that sprout within the wing scales. Artificial Morpho-like structures carved into solids using microlithographic techniques are being developed by researchers at GE Global Research in New York, in collaboration with others at the State University of

New York at Albany and butterfly-wing expert Pete Vukusic at the University of Exeter in England, as colour-change chemical sensors that can identify a range of different liquids. These might find applications for sensing emissions at power plants, monitoring of food safety, and testing of water purity.

Researchers at Columbia University and Harvard University used a new technique called infrared hyperspectral imaging to find out how butterfly wings avoid overheating. They learned that butterfly wings are based on a complex thermodynamic structure that can teach us about how to make more efficient cooling materials. They discovered that butterfly wings contain a network of mechanical and temperature sensors that work similarly to a household radiator heater. It turns out that the scales covering different parts of the wing have different shapes to help regulate the wing’s heat (Figure 7 – Booklet of France 2020 with butterfly wings). Butterfly wings don’t overheat because of a process called radiative cooling. Because heat is electromagnetic radiation generated by the vibration of molecules, when a material exposes more molecules on its surface it will be able to dissipate more heat. Therefore, the structure of materials will allow them to release heat more quickly than others.

So the butterfly wings are joining a growing list of nature that inspires technology. Because of their complex thermodynamic structures, butterfly wings can teach us how to make more efficient cooling materials. The researchers are using what they learned from butterfly wings to develop a cooling polymer and spin it into nanostructures inspired by butterfly wing anatomy. This material could be used to coat structures such as buildings to help them get rid of heat. Similar heat-repellent materials are often white because that colour doesn’t absorb heat. But as a bonus, just like butterflies, this new lightweight cooling material could be made in a variety of colours. White Morpho butterfly-inspired with stunning pearlescent iridescence (Figure 8 – Stamp of Nicaragua 1994 with the White Morpho butterfly) cooling materials would be especially useful for developing heat-resistant aircraft. Nature is the ultimate inspiration for aircraft. Someday, airplane wings could be as efficient as butterfly wings. 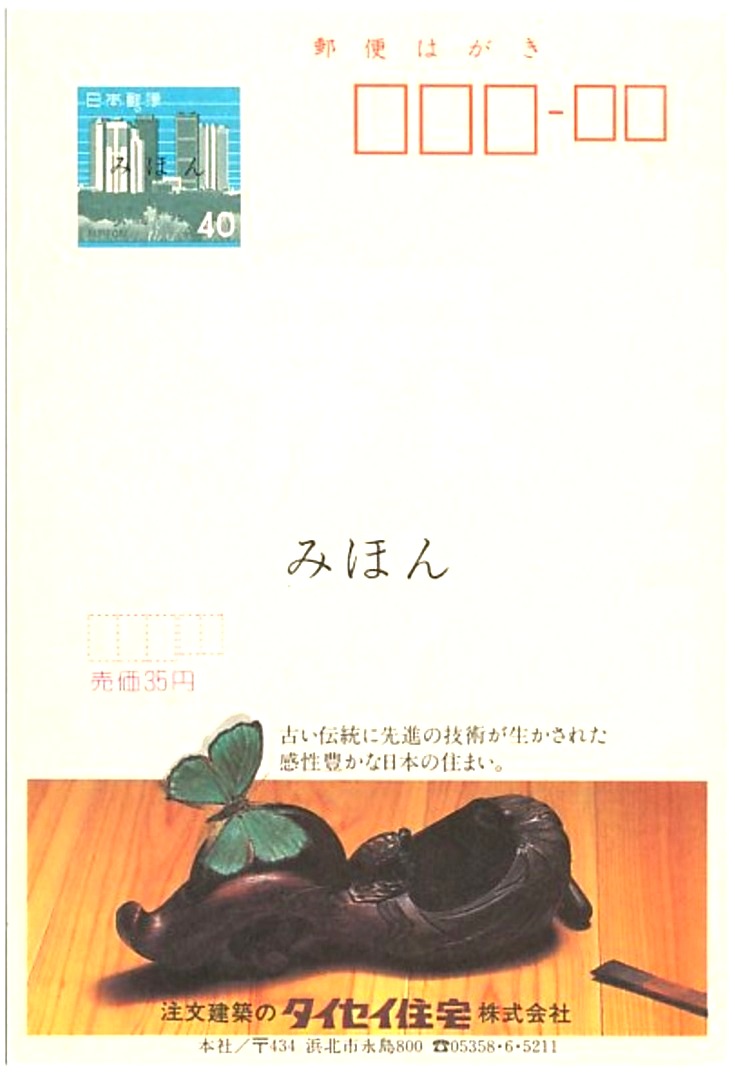 Heart disease is one of the leading causes of death around the world. Therefore finding easy and early ways to screen the good drugs for heart patients is vital. Inspired by the structural colour of the Neozephyrus japonica butterfly wings (Figure 9 – Stationery card of Japan 1982 (specimen) with iridescent butterfly Neozephyrus japonicas), researchers at Kyoto University’s Institute for Integrated Cell-Material Science have created a device based on structural colour principles. Scientists have applied the principles of structural colour to a device that could be used to test the effect of drugs on heart cells. So a group of researchers in Japan have produced a butterfly wing-inspired structural colour device for measuring the beating of heart cells, which they hope will help speed up the process of pharmaceutical testing. 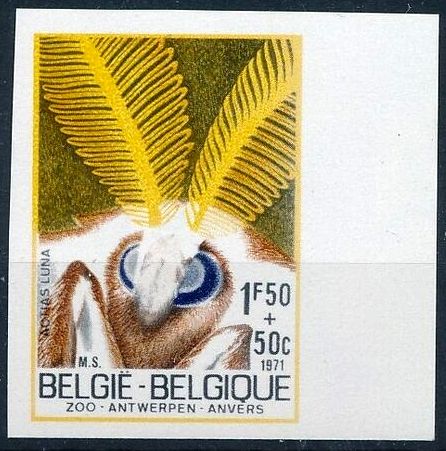 Structural coloration has potential for industrial, commercial and military application, with biomimetic surfaces that could provide brilliant colours, adaptive camouflage, efficient optical switches and low-reflectance glass. Far from a curiosity, structural colour is a tool to achieve a cleaner, less polluted world. With structural colour, we can make plastics using fewer materials and it also facilitates recycling according to a cradle-to-cradle production philosophy.

Natural systems of the butterfly wings offered also ideas for future anticounterfeiting measures. Currently, nanostructure-based anticounterfeiting measures exist to protect various forms of currency, documents, and bank and identity cards. One specific structure comprises a single sculpted multilayer that produces microscopic arrays of two individual structural colours. These colours are juxtaposed in such a way as to produce the appearance of a third colour, in the same way that a colour television creates the full colour spectrum by adding together three individual colours with different intensities. But the specific design of the multilayer of this particular butterfly assigns anomalous polarization properties to only one of the two individual colours. In other words, the reflection of one colour is polarized, while that of the other colour is not. This offers a covert and additional security feature that considerably decreases the risk of counterfeiting. For example the blue and yellow juxtaposed regions create the overall green (similar appearance of the bright green on the butterfly wing) through a highly specialized multilayer design system (Figure 11 – Stamp of Indonesia 1963 with butterfly Papilio blumei flickering emerald spraying and iridescent green colour on the wings). In addition to the colour effect, the multilayer produces a strong polarization effect that cannot be seen in the image. So scientists have been taking specific nanostructure designs directly from butterflies and moths, and trying to replicate them for use as security features in currency.

Butterflies and moths produce some of the most brilliant colours in nature (Figure 13 – St. Thomas & Prince 1992 miniature sheet with iridescence Urania moth).  The iridescent colours found on a butterfly’s wing may soon be appearing in the clothes we wear. British scientists are studying the optical trickery butterflies and moths use to produce their spectacular colours. They believe the results may lead to spray-on iridescence for the fashion industry.

Black and brown colours of the butterfly wings are from melanin, but the blues, greens and reds are created by the microstructure of the scales and not by pigments. The world around us is highly colourful, and it is somewhat awe inspiring that a large fraction of the colour of everyday animals, insects and plants is produced using structures that are in fact small nanoscale assemblies which selectively reflect certain wavelengths of light.

The Author is ready to help for philatelists in creating of philatelic exhibits on butterflies and moths. His address: Vladimir Kachan, street Kulibina 9-49, Minsk-52, BY-220052, Republic of Belarus, E-mail: vladimirkachan@mail.ru