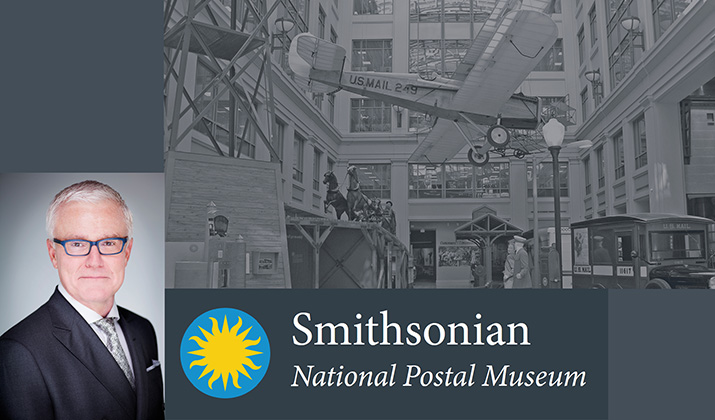 The Smithsonian’s National Postal Museum has announced the appointment of Charles F. Shreve as chair of its Council of Philatelists. The council provides the museum with philatelic advice, advises on engagement with the global philatelic community, promotes and advocates for the museum’s mission, purpose and programs to the nation and helps build the financial base of the museum. Members are appointed by the Smithsonian’s Board of Regents.

“Charles Shreve’s leadership was pivotal in helping the National Postal Museum create the William H. Gross Stamp Gallery, the finest collection of philatelic exhibitions in the world,” said Elliot Gruber, director of the museum. “He assumes chairmanship of the museum’s Council of Philatelists at a crucial time as the museum re-imagines its atrium level galleries and public spaces, as well as our strategic commitment to develop and launch new digital engagement experiences.”

Shreve has served on the museum’s Council of Philatelists since 2001. He is a life-long professional philatelist who has made a career of his hobby for more than four decades. In the early 1980’s he developed an innovative style of describing and presenting stamps in luxuriant auction catalogues, which allowed him to be counted among the premier auctioneers of high-quality U.S. and International stamps and postal history. In 1993 he founded Shreves Philatelic Galleries, and the firm quickly rose to a leading position in the international philatelic marketplace. In 2007 he sold his firm to an international auction company based in London and became an independent consultant for high end collectors. In 2012 he joined Robert A. Siegel Auction Galleries as director of their International auctions. In his career Charles has been involved in the sale of nearly one billion dollars’ worth of rare philatelic material.

Shreve succeeds Donald Sundman as chair of the museum’s Council of Philatelists. Sundman served as chair since 2003 and will continue serving as a member of the council. “Don Sundman has been a central guiding force for the National Postal Museum,” said Gruber. “His dedication and passion to the National Postal Museum has been instrumental in broadening the reach of the museum within the global philatelic community.”

Other members of the National Postal Museum’s Council of Philatelists are listed on the museum’s website.

About the Smithsonian’s National Postal Museum

The National Postal Museum is devoted to presenting the colorful and engaging history of the nation’s mail service and showcasing one of the largest and most comprehensive collections of stamps and philatelic material in the world. It is located at 2 Massachusetts Ave. N.E., Washington, D.C., across from Union Station. The museum is currently open Friday through Tuesday, 10 a.m. to 5:30 p.m. For more information about the Smithsonian, call (202) 633-1000.