Charity stamps are well known to collectors. Some stamps have been overpriced to sponsor a good cause. The reconstruction of Orval Abbey in Belgium therefore owes a great deal to philately.

Located in Belgium, one kilometre from France, Orval Abbey is one of the few Trappist abbeys in the world. While the abbey was founded in the Middle Ages and experienced several centuries of peace, the monks who lived there were driven out during the French Revolution. From the end of the 18th century to the 1920s, Orval fell into ruins. If the abbey and its brewery are flourishing today, it is partly thanks to philately. Indeed, the profits collected by the Orval series have financed part of the abbey’s work and have delighted many philatelists. It must be said that today, these series are part of the “must-have” of Belgian stamp collectors

Do you know these series?

In 1928, the so-called “Première Orval” (First Orval) series was issued. Based on drawings by Gérard de Vlaminck with rotogravure printing, it includes 9 stamps in 4 different designs. The facial values of these stamps include an overprice for the reconstruction of the abbey. So when we talk about the 5 cent stamp, we have to count 5+5 cents.

The stamps above, issued in large numbers, take on a much higher value if they are overprinted.

There are several overprints. First of all, the Antwerp Philatelic Days. There are only 5000 of them. The stamps bear a round overprint with the date 3 and 4 November 1928. 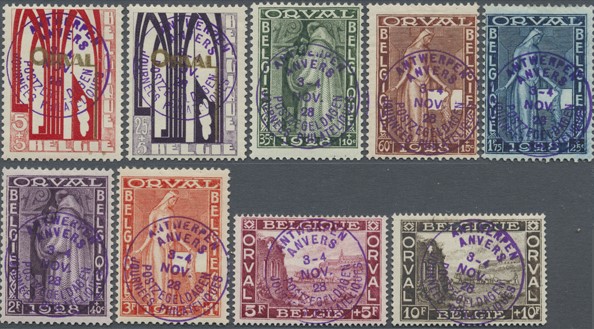 On August 19, 1929, a special overprint bearing the L of Leopold III, a crown and the date was applied to 5000 stamps on the occasion of the laying of the first stone of the new site.
In September 1929, some stamps were perforated with a double line of chevron-shaped dots. This one exists horizontally and vertically depending on the stamps.

On October 15, 1933, the second series of Orval stamps was issued, called “Deuxième Orval” or “Grande Orval” (Second Orval or Great Orval). It includes 12 different stamps. We owe the drawings of the five lower values to Henri Vaes based on photos by W. Kessels. The next 4 stamps are part of Irene van der Linden’s work. Finally, Jean Remy is the author of the 10 franc stamp. All these stamps have been rotogravure printed.

On June 20, 1939, the “Troisième Orval” (Third Orval) series was issued. This set of 6 stamps refers to the abbey on the one hand, and to Kings Albert I and Leopold III of Belgium on the other hand for its highest value (5 francs).

On July 1, 1941, a very beautiful series of 12 stamps, the “Quatrième Orval” or “Les Moines” (Fourth Orval or The Monks) designed by Hubert Dupond, was issued. This series refers to the monks and their activities. The 5 franc stamp, usually grey-black, is also available in blue in the form of blocks also issued in 1942. There are two types: one indicates Belgium-Belgium and the other België-Belgium (in French and Dutch and vice versa).

On October 9, 1943, the “Cinquième Orval” (Fifth Orval) series, known as “Lettrines” (Initials), raised more funds. This set of 6 stamps is based on the letters that make up the word Orval.

Would you like to complete your Orval stamp series? Find the stamps you are looking for on Delcampe!

Do you remember your first computer?

Back to school: let’s have a look at the great new features on the Delcampe website!