Richard Stock FRPSL has faced a most unusual period as President of the Royal Philatelic Society London, unlike that of any of his predecessors. Elected in June 2019 for a two-year term, he was able to chair only a handful of ‘face-to-face’ meetings, having quickly to adapt to the new world of Zoom and YouTube displays. Having assembled a fine selection of displays for the two years, sadly most could not be enjoyed ‘in the flesh’. (Press Release from RPSL) 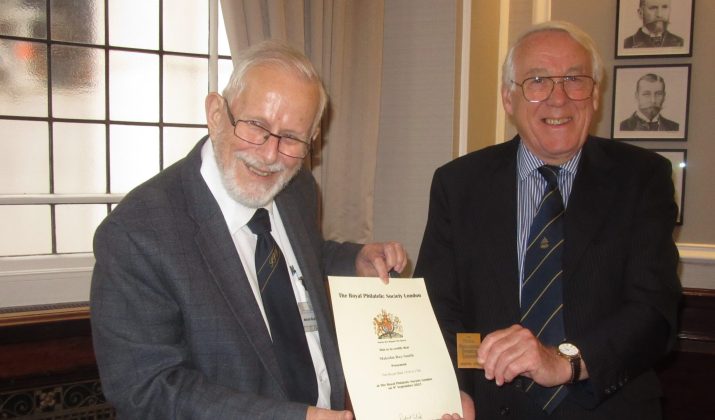 It was therefore with much pleasure – and probably relief – that he took the Chair once again on 9 September to introduce a truly remarkable display from Malcolm Ray-Smith FRPSL. It was the ‘third time of asking’ as two previous attempts at having the presentation had to be aborted. It was enjoyed not only by members but also by many guests from the City of London, representing the livery companies, museums and libraries.

Malcolm’s display focused on The Royal Mail 1516 to 1766. The two dates marked significant landmarks in the development of the postal service. It is thought 1516 is the year when Brian Tuke was first called by the title of Master of the Posts. It was in 1766 that Ralph Allen died: in 1713 he had become postmaster at Bath before being appointed Master of the Bye and Cross Posts in 1720. In that role he was responsible for improving the provincial posts all over England, effectively creating the public postal service we know today.

All were astounded by what they saw, remarkable letters tracing events over the 250 years, not least the role played by the English Civil Wars. Richard Stock described the presentation as ‘outstanding, magnificent and comprehensive’, views echoed by Simon Richards FRPSL, a Vice-President of the Society giving the Vote of Thanks, who spoke of an ‘extraordinary in-depth and amazing display, beautifully presented’.

A Belgian coin sold on Delcampe for over 8000 euros!